I'm sorry now, I packed my winter stuff away! It's been a horrible week of weather here; cold, wet and windy. I actually put my heating on for two evenings because I was tired of feeling cold. Despite the weather it's been a busy sort of week. Too busy to take outfit photos much of the time, but here's one I remembered to take as I was getting ready for bed on BH Monday night:

Everything charity shopped except the trousers which were bought from the sale rail in Sainsbury's!

I didn't go to a car boot sale on Monday because the weather was dodgy. I didn't want to drive there - it's about 9 miles away - to find it had been called off because of the weather. It didn't rain that much in the end but I did something very useful instead. I got out my sewing basket and did some mending! I sew so rarely it's worth a blog mention.

I took up two pairs of trousers (including the one in the photo above), sewed a tie back onto a dress and mended, quite successfully, I thought, a rip in my eldest grandson's jacket. He turned up unexpectedly on BH Monday and it was lovely to see him. I did lots of his washing and he set off back to London with a red suitcase full of clean clothes and a large shopping bag containing a dismantled computer desk.  I picked it up in the British Heart Foundation shop for a fiver!

The weather has interfered with my walking, too. I wanted to walk on Tuesday but it was a day where it rained all day without stopping until about 5 pm. I'd gone to the the food bank in the morning and had hoped it would clear up enough in the afternoon to go walking  - but it didn't. It wasn't a particularly nice day on Wednesday either, but I went walking in London with my daughter.

We walked part of the Jubilee Greenway. We didn't realise this when we started out but kept seeing discs in the towpath saying 'Jubilee Greenway'. In fact, we were following a walk I found online, but it dated back to 1999;  'Little Venice to Mile End', 8.3 miles.  By the time we added the walk from the train to the tube, it came to 10+ miles.

We started off from Little Venice (nearest tube Warwick Avenue). My primary school was quite close to here and it was a frequent outing taken by the school .  Here you pick up the Grand Union Canal and the walk was mostly on the canal towpath. We passed London Zoo, where we saw a couple of boars and in the aviary some herons and cranes. At some point we picked up the Regents Canal and came to Camden Lock; then King's Cross, then Islington where we had to get off the canal towpath and walk to the Angel. We picked the towpath up again and we stayed on it until the end, at Mile End. We could have gone on for another mile to Limehouse Basin, but daughter was freezing so went for a coffee to warm up. It was a col, windy and wet day but the walk was great! 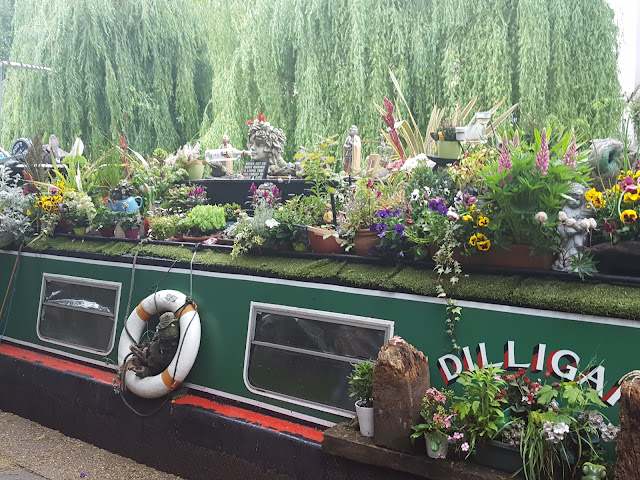 We saw this wonderful display on one of the many narrow boats we passed. 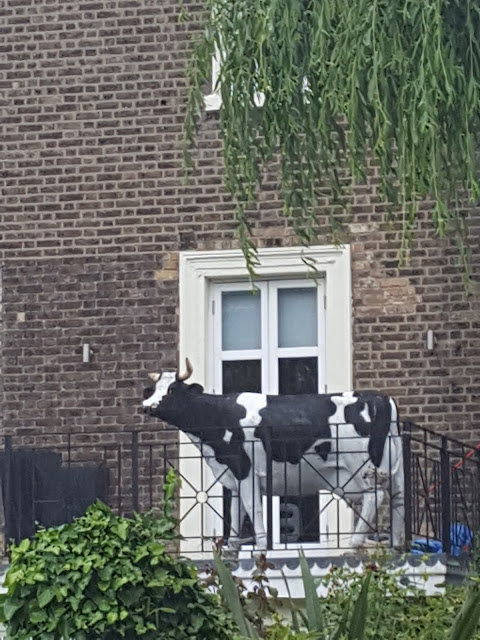 One canal side dweller had opted for a life size cow as an ornament on their balcony... 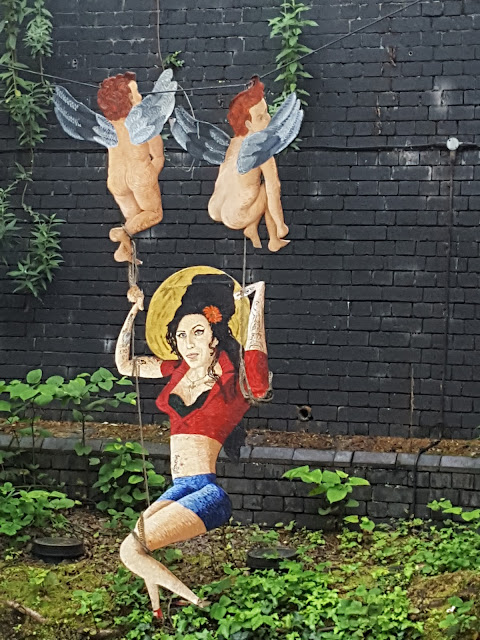 This gorgeous lady, on closer inspection, is being defecated and urinated on by two cherubs  - or is it just me?  She was dangling from the opposite bank of the canal.  She looks uncannily like Amy Winehouse. 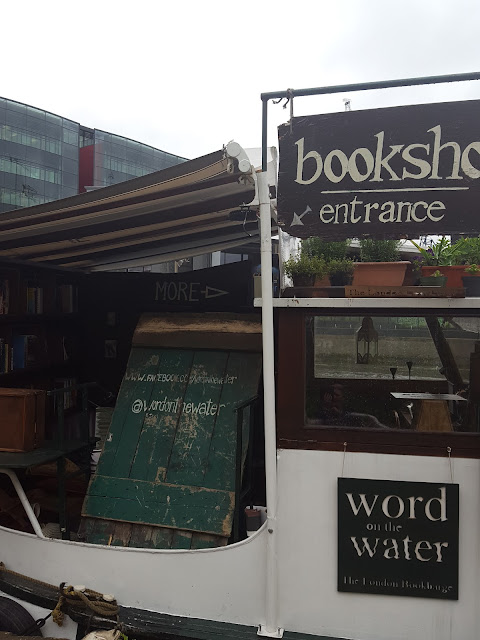 Finally, an extremely enterprising person has set up a floating bookshop on the canal called: 'Word on the Water'. How clever! Unfortunately, it was closed so we couldn't have a nose round.

We saw police divers at work. I asked them if it was a training exercise and they said no. As there weren't any body bags  or stretchers around I assumed they might have been searching for a weapon but I suppose I'll never know. Damn it, I want to know what they were looking for!

Back to London on Thursday to see ex mum-in-law. We took middle and youngest grandsons to Nandos - they love it. Can't see why - I was not impressed. 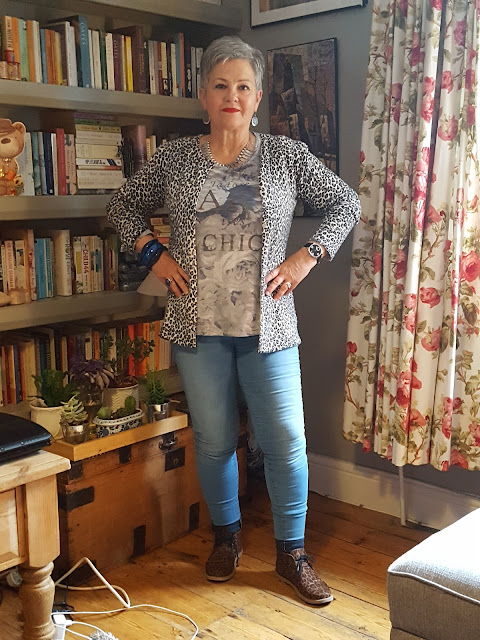 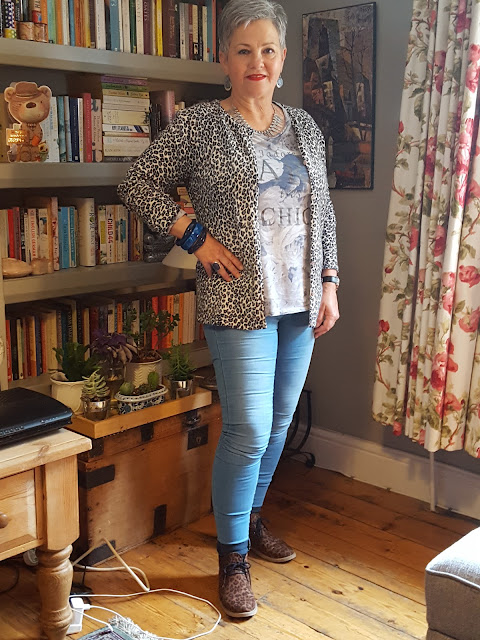 It was so cold, this is what I wore when I went food shopping! 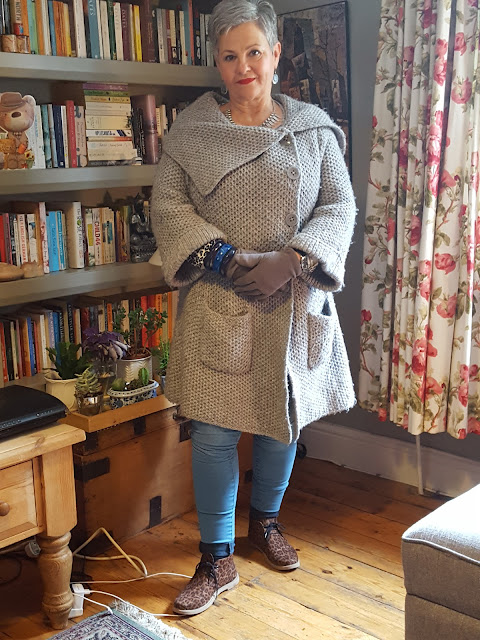 Luckily, I don't pack everything away for summer. This coatigan is by Mint Velvet and I bought it three years ago from a charity shop in Northampton. Yes, it was cold enough for gloves!

I believe the weekend is bringing better weather - I do hope so!

I'm linking up with Anne's 52 Pick Me Up - Black/White at Spygirl here just because I can!