I'm getting better at these selfie photos. It's useful when OH is not around. In fact, I'm thinking of buying myself a selfie stick if I can find a cheap one somewhere! I have tried using my camera which my daughter bought me about 7 years ago but unfortunately my Chrome book and it can't talk to each other. I've also downloaded an MP3 album which I paid for and can't get it to play on my Chrome book either. It will just have to wait until the eldest grandson comes to visit and I'll get him to sort it out!

This was Fridays' outfit. 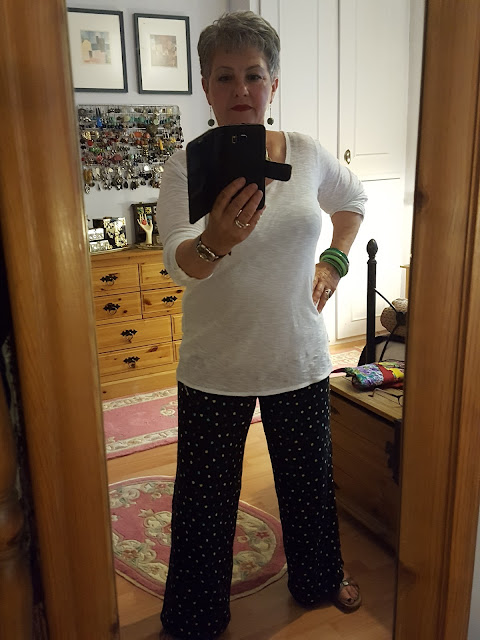 Top charity shopped some months back; from £1.00 rail somewhere. Loose trousers; a recent  charity shop purchase but can't remember where -  they are black with greeney blue, lime green, white and tan splodges; sandals are the T strap Clarks I mentioned in my previous post and this is the sixth year I'm wearing them. They'll probably outlive me at this rate! Bangles charity shopped. 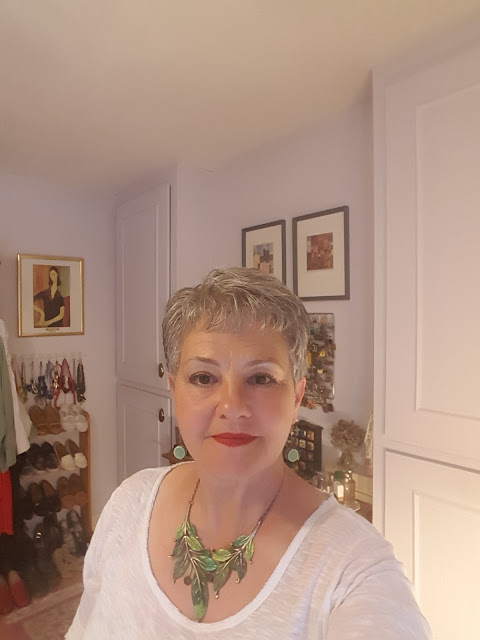 Necklace bought from local shop 'Simi and Lola' and the earrings are from Sainsbury's, I think, They're pretty old now at least five years or thereabouts...

I had a relatively lazy day on Friday, did the school run and some chores around the house then got stuck into another book. I got an email from the library telling me a recent reservation (the latest Anne Tyler) had arrived so that's another one to cram in before I go away. I still have two reservations outstanding (the latest from Annie Proulx and Sarah Moss) so I think I had better cancel them and re reserve when I get back. 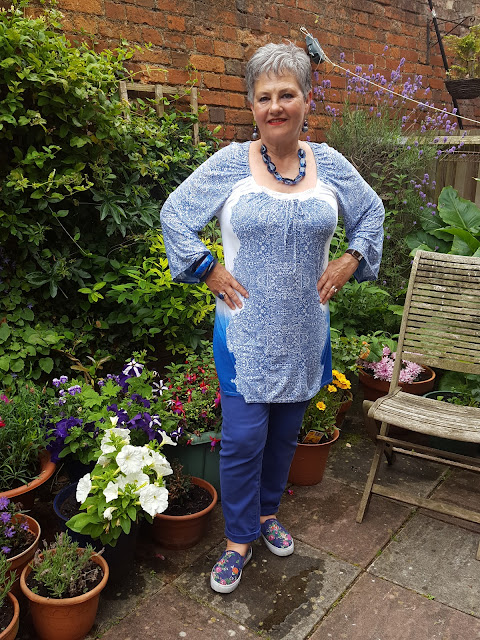 This is what I wore on Saturday. I went out walking by myself to recce another walk (nearly 8 miles) and I just put my walking boots and socks on. The top is made of cotton so it is quite cool - just as well as it was very humid. 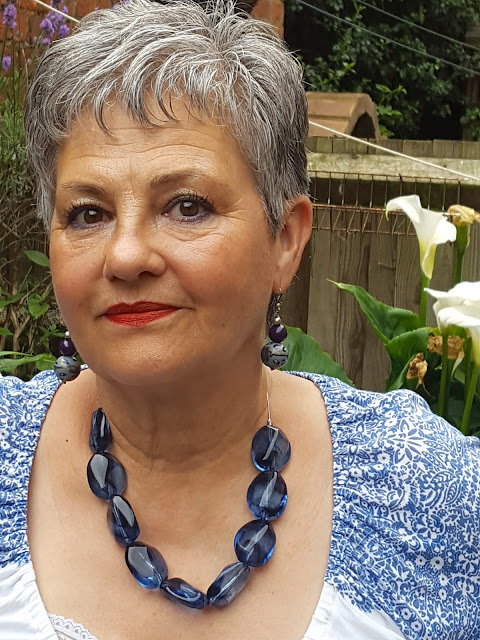 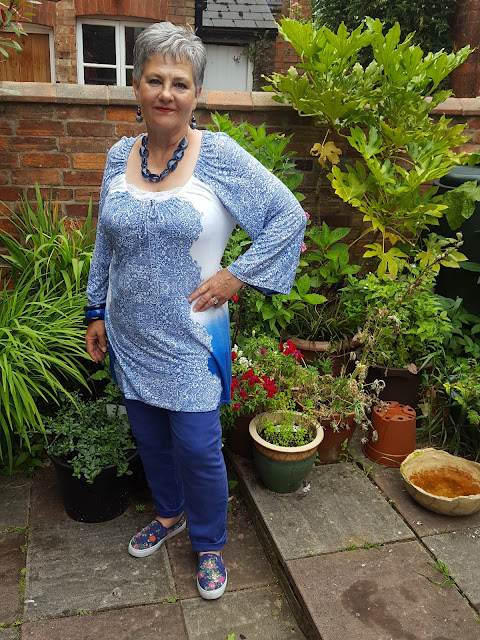 I think I'm fairly good at using new technology and I've just downloaded and discovered 2 new things. The first came via a letter asking if I had heard about something called 'Streetlife'. Some of you here in the UK maybe familiar with it already, but it was new to me. I signed up to the website and its remit is wider than one street; it covers the whole of Bedford and some of the surrounding villages. It's very useful; people asking for recommendations of tried and tested tradesmen, buying and selling objects, requests to join a book club etc.

The second thing is an app for the phone called Schpock - the boot sale app. It lists items for sale in your area. I have already bought something - a lovely rug for my landing. This isn't my landing but the landing in the upstairs of the pub where I collected it from. The floor actually sloped to the right but as the pub goes back to the 17th century this shouldn't be too surprising. 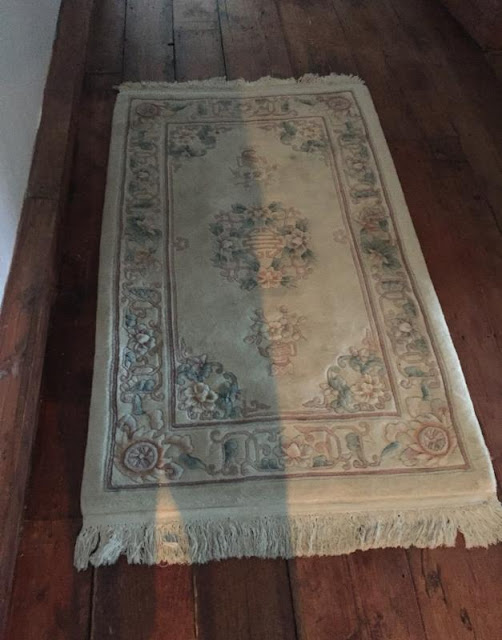 The pub had this amazing dresser -  the publican told me it was constructed by his friend from floorboards taken from a terraced house in Staffordshire.  I love the collection of Staffordshire blue and white pottery. 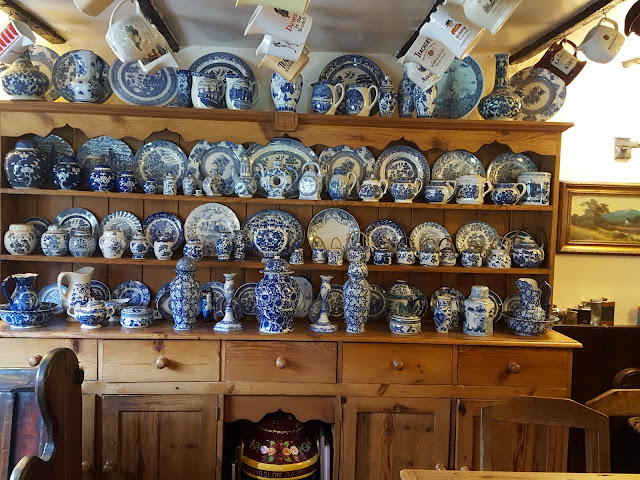 And these rather unusual individual seats like church pews were also part of the pub's lovely interior. 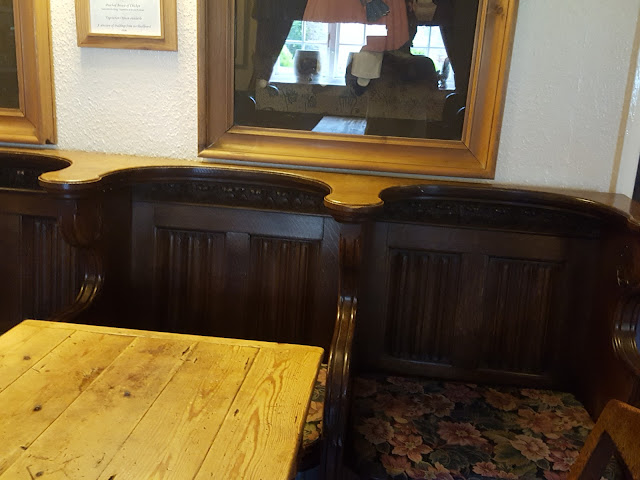 This was Sunday's outfit. 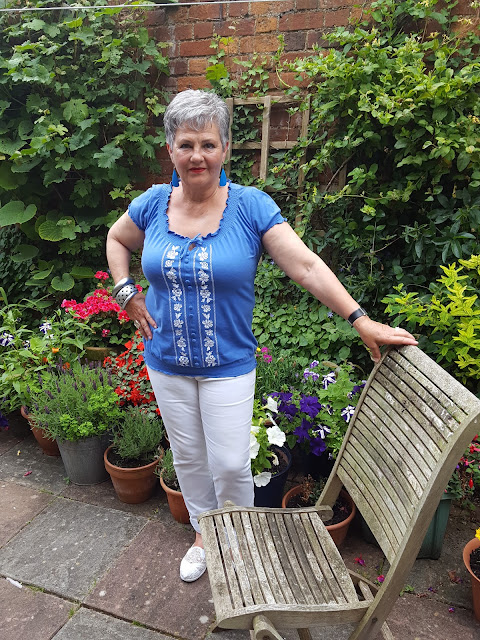 We went to the 'Black Tom Street Jumble'. The area of Bedford where I live is called 'Black Tom' after a highwayman who operated in the area in the 18th century.

I bought a lovely pair of sunglasses, new with tags on; originally from Allders Dept store and marked £69.00 - for £1.00! I also bought quite a few body creams, some cherry scones and a blue jug. Oh, I nearly forgot -  a pair of colourful striped tights!

I bought this top last Monday at Save the Children where I volunteer. It was £2.50. 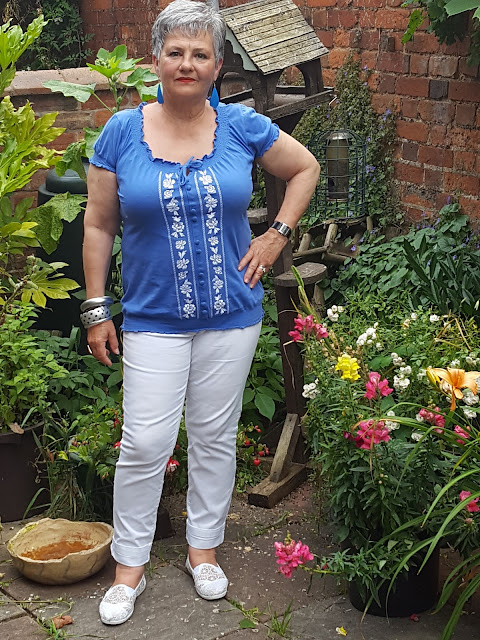 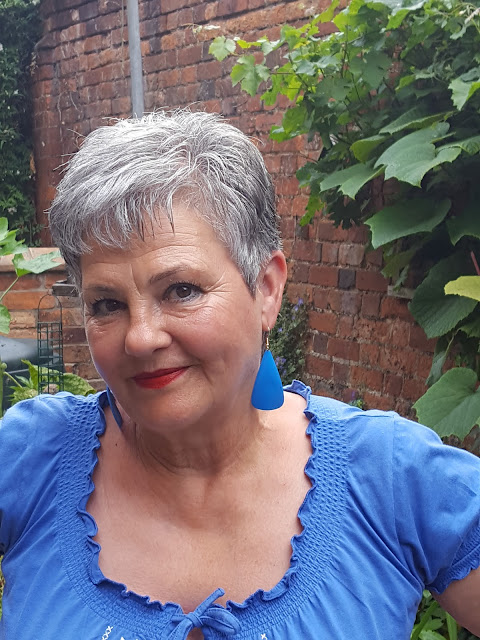 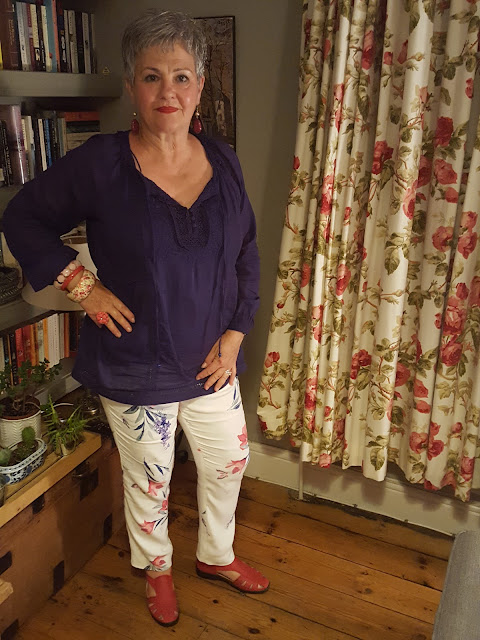 I wore this on Monday. I bought the trousers in the independent charity shop in town. The top was also charity shopped last year at the end of last summer and I hadn't yet worn it. It's by Monsoon and a deep and glorious purple. 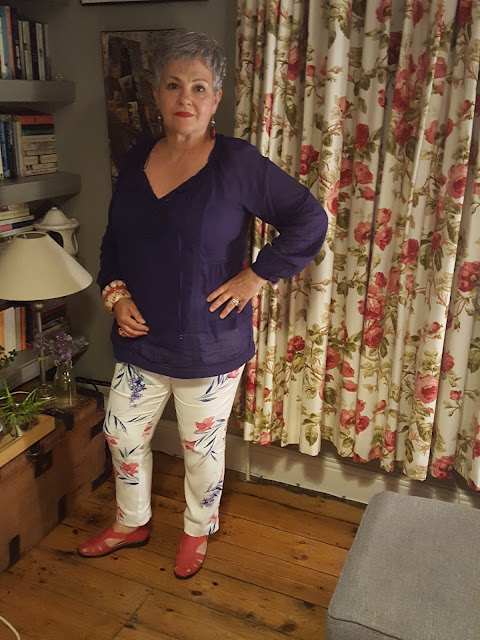 I bought these sandals at a local shoe outlet for £8.00. Very comfortable, and as I left my other pair of red shoes at our mobile home in Donegal I wanted a pair of red summer shoes to wear here. All jewellery is charity shopped as well. 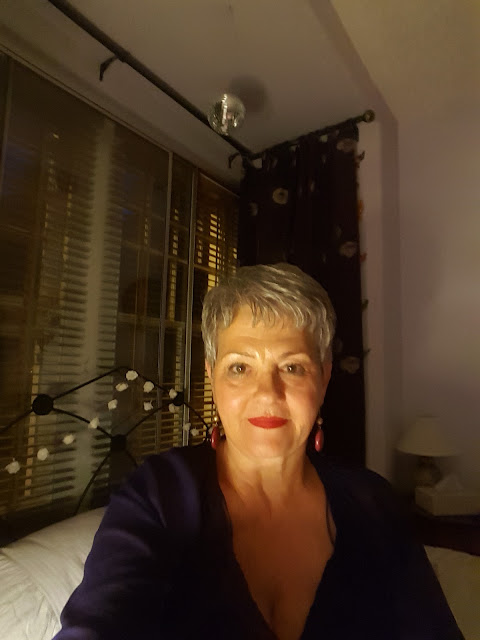 On Tuesday I went to see my friend in Cambridge. Her son's ashes had come home that day so I went to see how she was and I brought her a posy of flowers from my garden. We went out for a meal and then I drove back in very heavy rain. 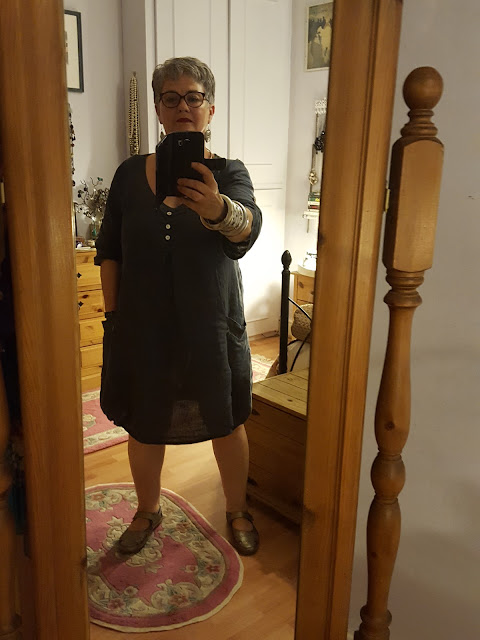 I didn't remember to take photos until bedtime on Tuesday evening, hence the selfies. This cotton dress is Italian and charity shopped earlier this year but I can't remember where. It's linen, creases like buggery, but very comfortable and cool. 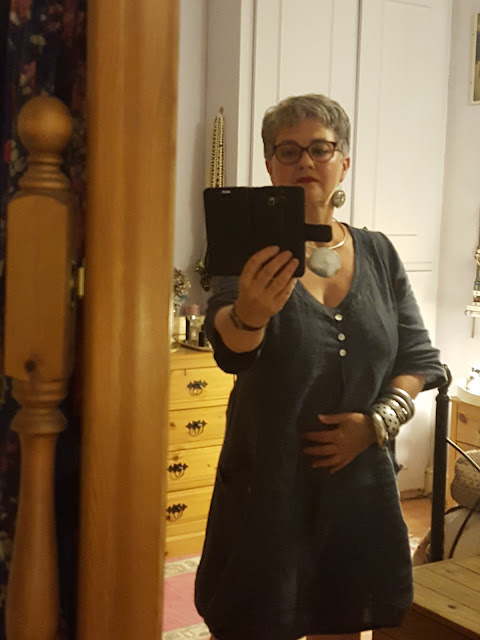 On Wednesday I walked with the Ramblers and we walked in Milton Keynes along the Grand Union Canal doing almost 8 miles. It was a lovely walk and although I dislike Milton Keynes, the city, the countryside is beautiful. It was also a really nice day; not too hot and with a cool breeze at times. 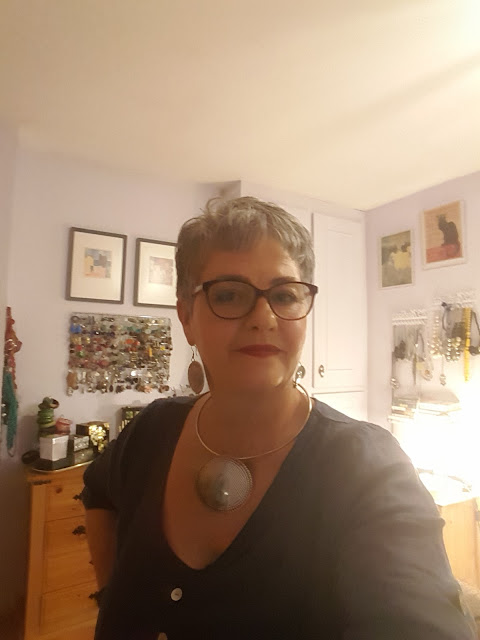 This was Thursday's outfit. 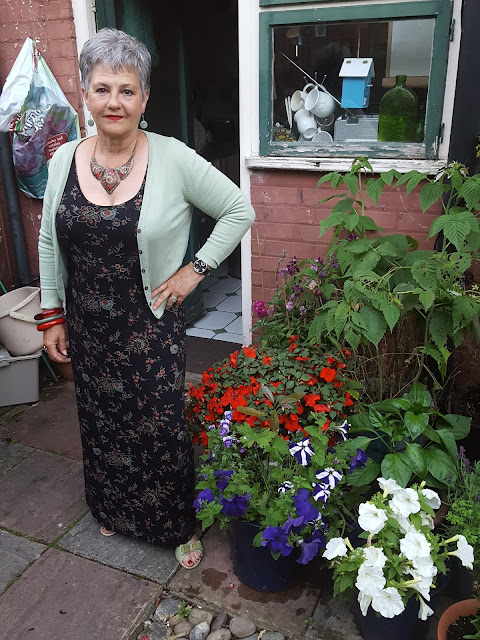 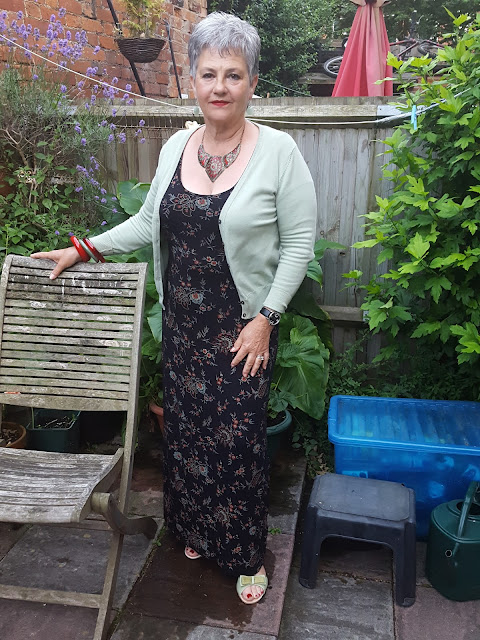 Every thing is charity shopped. Dress is from Store 21, cardigan from M & S, sandals from Leeds charity shop. 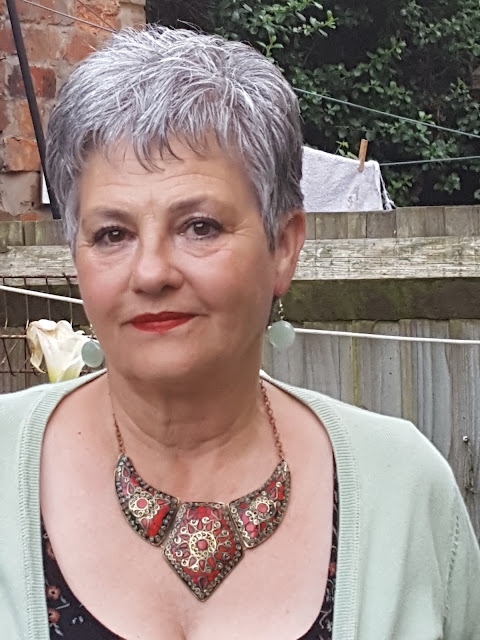 All jewellery charity shopped. The earrings are a recent purchase from Keech Hospice shop, necklace from the RSPCA in Newport Pagnell. Bangles from a range of charity shops - too many to mention. I mixed red and green bangles to echo the colour in my outfit.

I bought a couple of more items this week - despite my vow not to! A pair of Hobbs navy checked Capri trousers (£3.99) from British Red Cross; one of  the few things that weren't £1.99! A floral dress from ASOS (£3.00) from Save the Children. I hummed and hawed over the dress on Monday and then on Thursday went back to buy it. It won't be useful for the holiday because of the material, but it will be useful for the cooler months worn over jeans or leggings and cardigan or a jacket. You can't pass up a bargain now, can you?

I also bought myself a selfie stick with a clicker and need to get practising. It's not always a good idea to rely on other people to take your photos and hopefully this will help when I haven't got anyone to hand.

This was what I wore on Friday. I don't usually wear leggings much in the summer but I had started out in skinny jeans but then dropped a can of coke which sprayed me all over, so I had to change out of them. 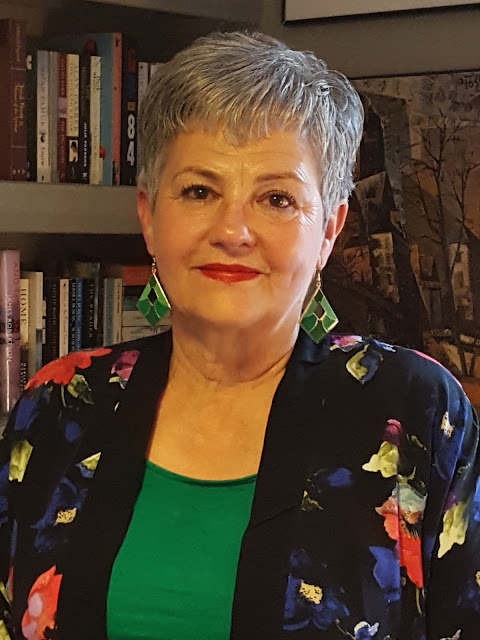 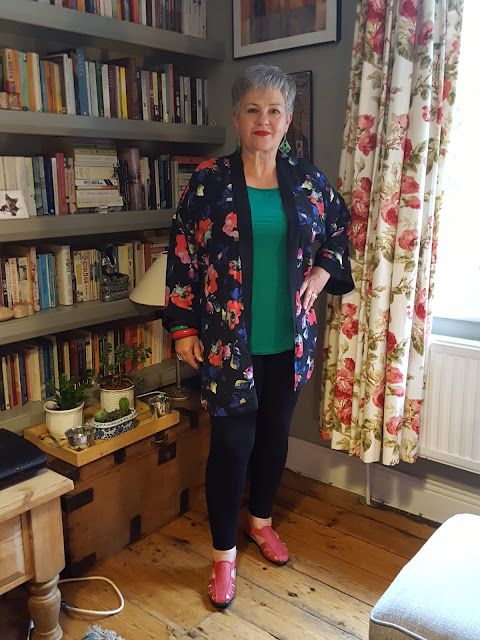 The reading has been going well. I'm on the last novel but I still have two more non fiction books to read and I should manage this before the 28th when we go away.

It's the River Festival here in Bedford this weekend. I will be there on Sunday on the Rambler's stall trying to persuade the public of the benefits of walking for pleasure. I hope the weather stays fine.

Hope you all have a lovely weekend!

- July 15, 2016
Email ThisBlogThis!Share to TwitterShare to FacebookShare to Pinterest

Hello again! Where did January go...? When I left you back in the middle of January we had just entered into a very cold and icy weather s... 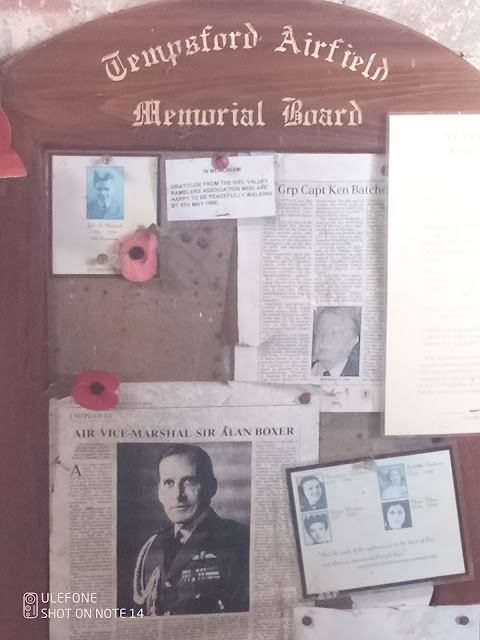 About Me - Veronica - 60 something, charity shopping, life loving woman

I retired in 2014 after 31 years of teaching in Nurse Education, Further Education and Higher Education. I live in a market town 55 miles from London with my partner. I have two grown up children and 3 grandchildren who range in age from 12 to 27 years. I love charity shopping; reading; walking; art; music; crochet; visiting my mobile home in Ireland and spending time with my family and friends in both England and Ireland.