Because I'm getting older my memory is not as good as it was. That's my short term memory I'm referring to. I used to have a marvellous memory for names although that is getting rusty now. Apparently long term memory is retained really well as you age. So, I'll have lots of memories I can look back on. This is one from 3 years ago, on my eldest grandson's 18th birthday. There he is combing his hair - as usual! Today, is his 21st birthday.

(Three years ago I used to dye my hair to cover my grey. I stopped dyeing it in December 2014 and I have no regrets at all.  I wrote a post about it here .My scalp is also a lot less itchier)!

To return to the memory theme.  I was present at this and the youngest grandson's birth and what magical moments they were. Now the eldest is at university in London; working his socks off  in a restaurant when not at uni and I'm very proud of him. We're off out again this Tuesday evening to eat and celebrate his birthday and I hope to celebrate many more birthdays with him and the rest of the family. 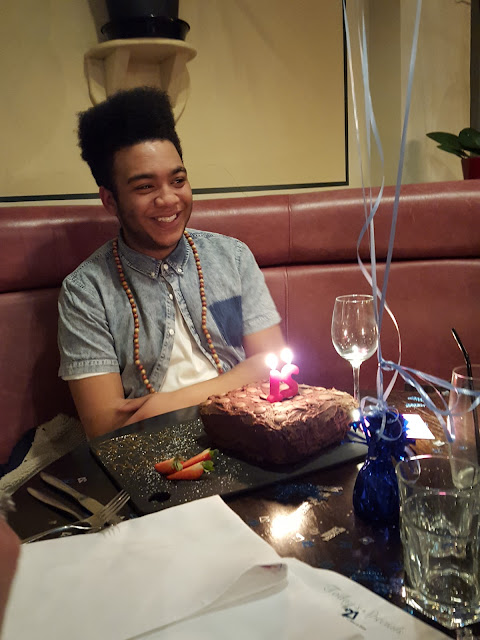 Here he is after being serenaded by the  Brown's restaurant staff and us and presented with birthday cake made by me.  He was incredibly embarrassed by it all but had the good grace to smile - just as I took this photo. Even though I had my glasses on it took me until later on in the evening to realise those were strawberry quarters NOT carrots! 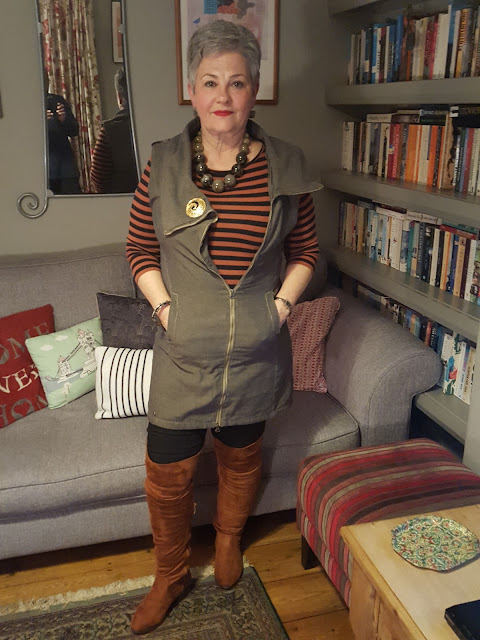 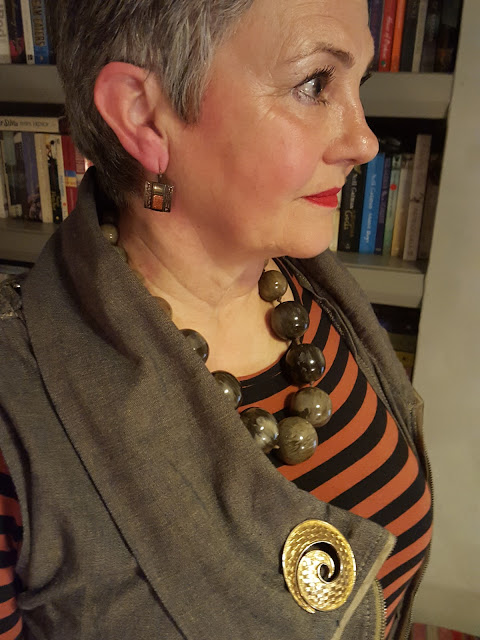 I'm looking very flushed here but I was rushing around before setting off to Milton Keynes and meeting grandson off the train.

I'm also reading a rather sad book about memory; 'There Were no Windows' by Norah Hoult.  It's about an elderly woman, who is clearly suffering from Alzheimer's disease, set in the 1940s. The story is narrated from the differing perspectives of the people she comes into contact with. Some of these people are from her past and some are more recent acquaintances. As her short term memory is exceedingly poor, she constantly repeats herself and asks the same questions to the increasing irritation of everyone she knows. She lives in fear of being sent to the lunatic asylum as she has no family who care for her  - but is at the mercy of her cook/housekeeper - or is she...? I'm still reading it so don't know the if she is or isn't!!

I'm off walking on Wednesday and Thursday with the Ramblers and if it stays dry on Friday I'll go out walking by myself on Friday in between the school run. I've got some birthday money left to spend so should be having a rummage on Wednesday or Thursday afternoon...

Hope you're all having a good week!

Hello and yet another fortnight gone by - again! I just want to thank you all for visiting and supporting my blog over the past almost 7 years! And just a reminder - don't be afraid to comment; comments are very special and truly appreciated. Also, if you visit regularly; please do follow me. It's nice to see you have followers and even better when they comment... Of course as soon as I had put my winter clothes away the weather became became very chilly; it started at the weekend and continued almost all the way throughout the last week of April. I wore this outfit on Wednesday. I didn't walk with the group as I had to take middle grandson's mum to hospital in Northampton at 7.30 in the morning. She had been self isolating to avoid catching Covid - hence middle grandson's stay - as she was undergoing day surgery.  I'm pleased to report she made a good recovery and was home that afternoon. I went to Aldi in the afternoon to pick up the weekly bits I always buy f
Read more

Too many unworn dresses and a blogger meet up.

Hello again!  On Wednesday, the first of the tiger lilies bloomed and the second of our roses. It has the most beautiful scent; almost sherbety. Unworn Dress No.1 I bought this dress during the first lock down in 2020 and had never worn it! It came from Vinted and is by Artigiano. Next jeans and white pumps by New Look; both charity shopped. All jewellery charity shopped except the earrings which were bought on Bedford market many years ago. I went for a swim on Wednesday; then off to Aldi to do part of the weekly food shop. By then it was time to pick up the youngest grandson from school and then make dinner. I lead such an exciting life - not! We watched 'Sewing Bee' in the evening; it's the quarter final next week. Time is flying by; it's hard to believe that at the time of writing this we're almost halfway through June; halfway through the year 2022. I remember when the year 2000 seemed aeons away but that was more than 22 years ago. At least the weather had imp
Read more