December 31, 2018
Happy New Year to you all and thank you for reading and commenting on my blog in 2018 . I appreciate your comments so much and get such a lot of pleasure from hearing from you. Looking forward to hearing from you in 2019. 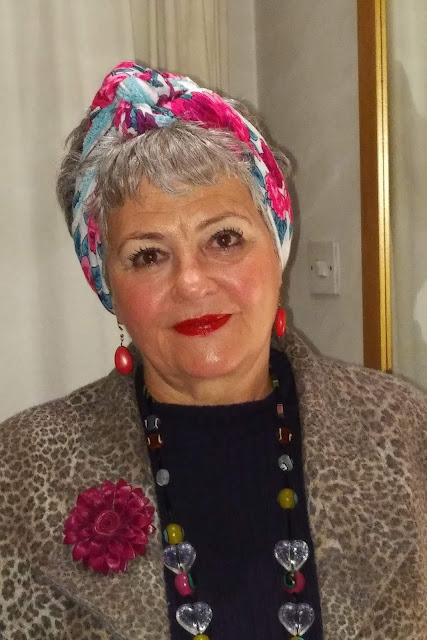 This is the 2.00 jacket I bought from the Willen Hospice shop in Newport Pagnell. It's  so warm that I can wear it without the need for a coat. All jewellery and scarf charity shopped.

A week or so before Christmas I dropped the Dutch pot lid (made of cast iron) on my phone and the screen was smashed. The display was affected as a big black blob obliterated most of it.  I had to send it off to be repaired or replaced and in the interim OH used his phone to take these photos. They're a little fuzzy and for that I apologise. 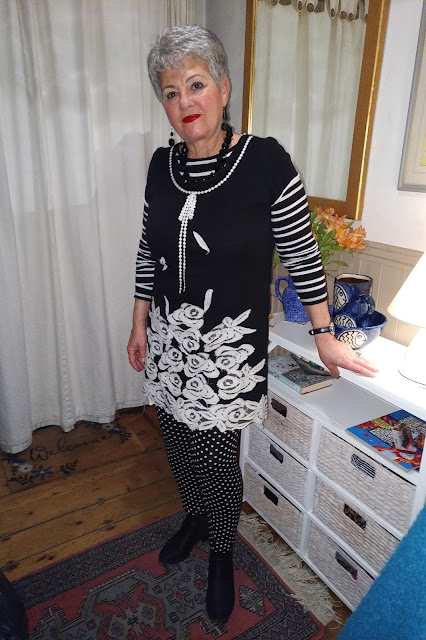 Spots, stripes and floral  -  all co-ordinating in black and white. I love pattern mixing. Everything charity shopped but can't remember where. 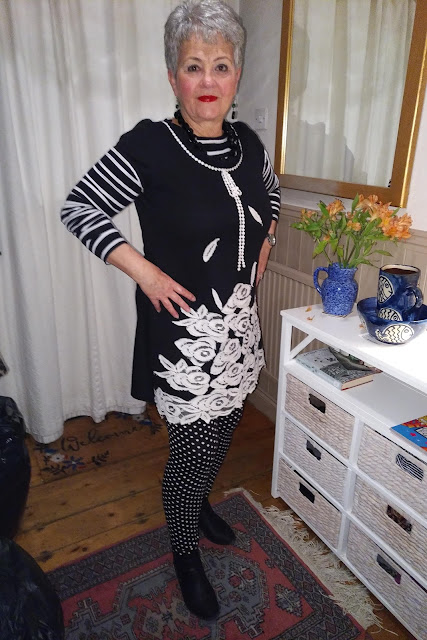 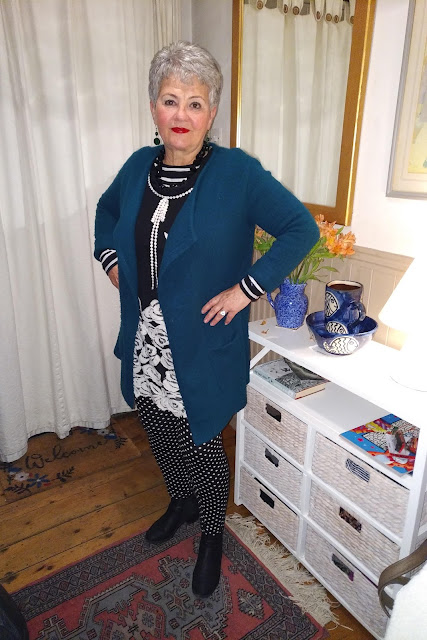 For warmth I added the 2.00 green cardigan bought from the Independent charity shop. 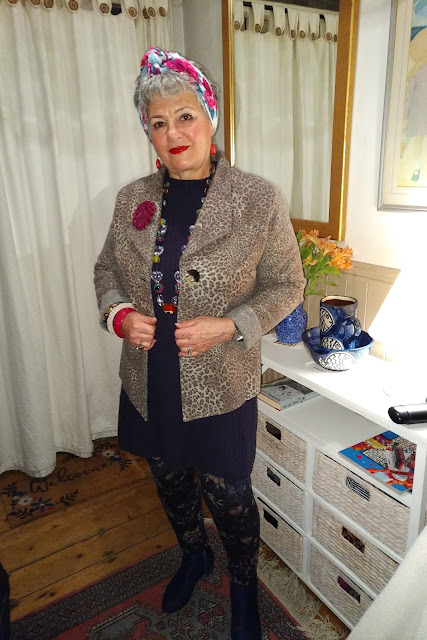 I wore this outfit to the foodbank the week before Christmas. I wanted to be warm because the rear warehouse is freezing. I also wore pink gloves but not in this photo.  Everything charity shopped except the leggings and the boots - retail.

I have a confession to make. I wore this knitted dress all day - back to front! That's why it isn't sitting level at the front and the neck is a bit high. I only noticed when I was undressing for bed... 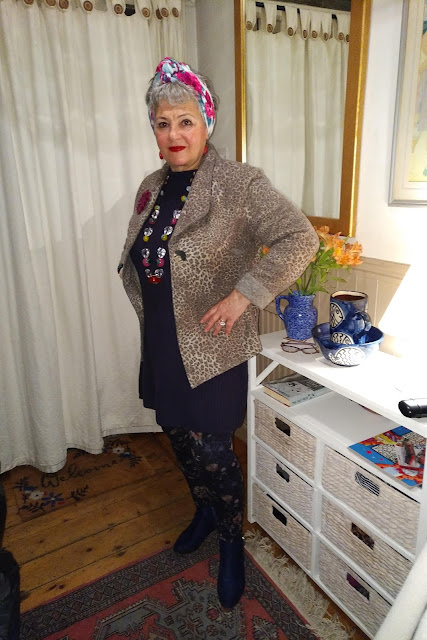 I also went for a little rummage in Kempston at the weekend and bought a rather nice orange boiled wool/felted jacket by Fenn, Wright and Manson for 8.00. Surprisingly, they had a second, green boiled wool/felted jacket from an unknown label for 6.00, but it didn't fit as nicely as the orange one.  I used to have a lovely blue wool jacket and OH washed it at too high a temperature, so it was ruined. I have a black one that I bought from a 1.00 rail somewhere but haven't worn it yet. The FWM orange jacket was my Christmas present to myself and I planned to wear it see my son the following Saturday before Christmas. 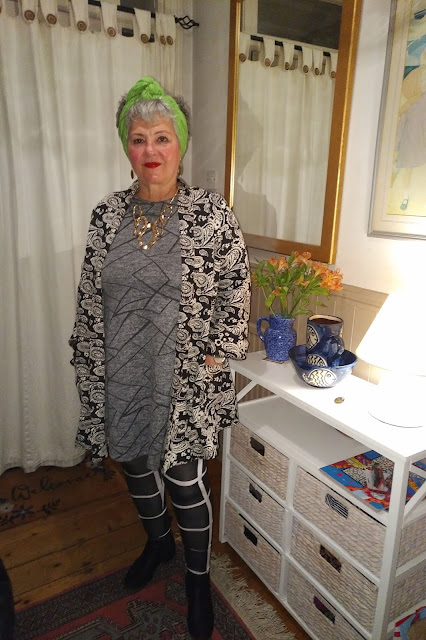 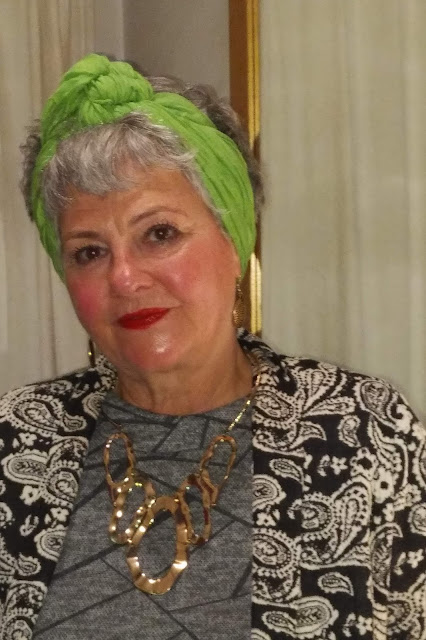 All jewellery and scarf charity shopped. 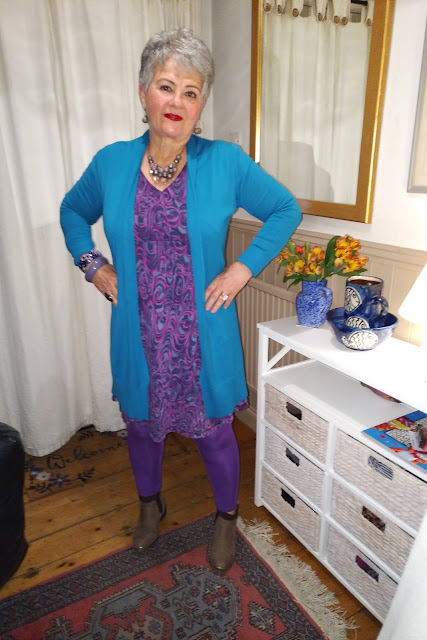 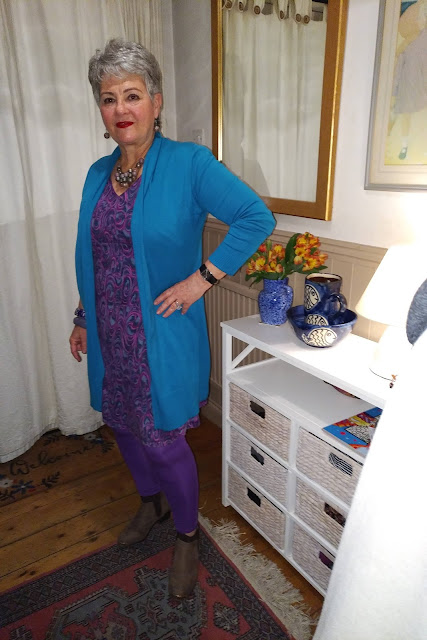 Photos didn't start out fuzzy but the final two did - why? Cameras are a puzzle to me! 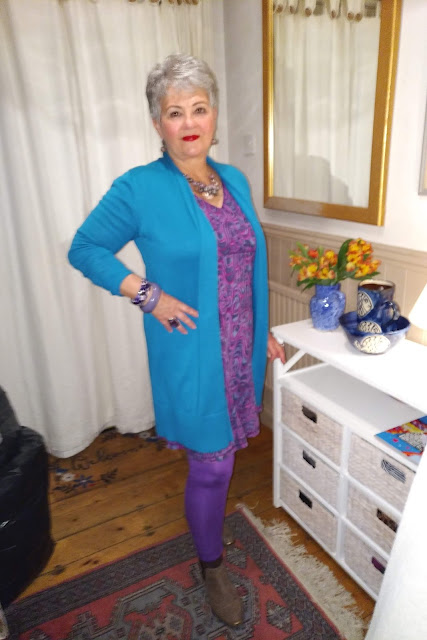 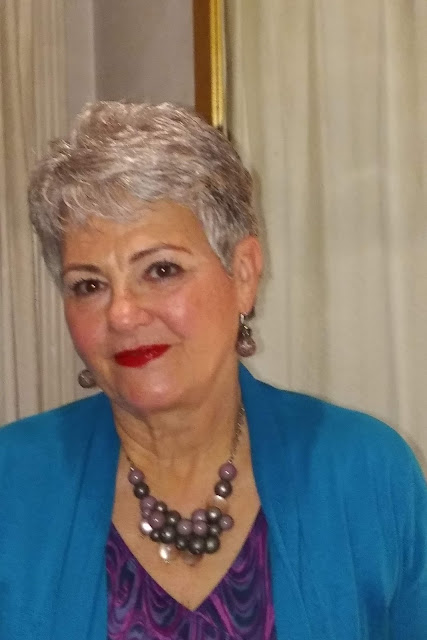 Our Christmas tree, which we have had for as long as we have lived together; 18 years, decided to stop working on Christmas Eve just around quarter to five. It's one of those ones with built in lights that change colour - quite trendy back in the day. But OH nipped into town - we're only a five minute walk away and bought a new set. I wouldn't have bothered but he loves Christmas... I couldn't take photos as I still hadn't got my phone back or even knew at that stage whether it was repairable or not. It has been strangely pleasant not having a phone but a bit frustrating when I want to take a photo or check things online quickly. 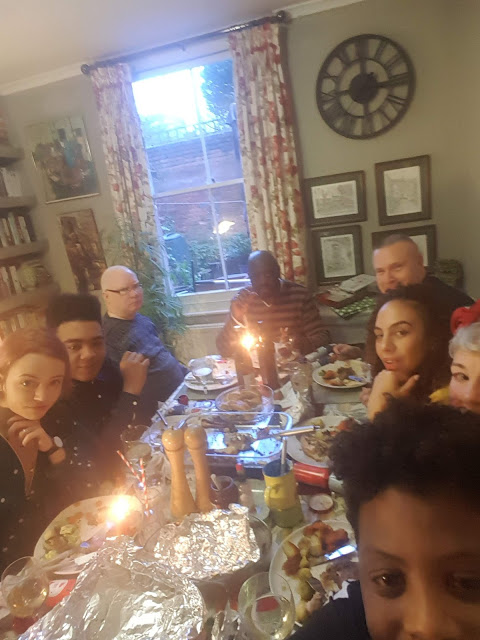 Only middle grandson missing here - he'd beat a sharp exit when the camera came out...

We had a lovely Christmas. There were 9 of us for Christmas dinner; I did the turkey and all trimmings and was super organised; I prepped all the vegetables on Christmas Eve and just had potatoes, sweet potatoes and parsnips to do on the day. Daughter made a delicious Beef Wellington and a Salmon En Croute as well. Daughter's partner came later in the day with his three children and his brother and there was a riotous and very competitive game of Charades played by 14 of us!  I did a small buffet for the evening.

Eldest Grandson and girlfriend stayed over Christmas Day and went to the sales in Milton Keynes on Boxing Day. No public transport in our area so I drove them there and they were able to get a coach back to London from Milton Keynes that evening, as both were back at work on Thursday. It was lovely to see them. There just enough turkey left to have a very small roll for breakfast and then I used the carcass to make soup on Boxing Day.

Another skirt and tunic outfit! 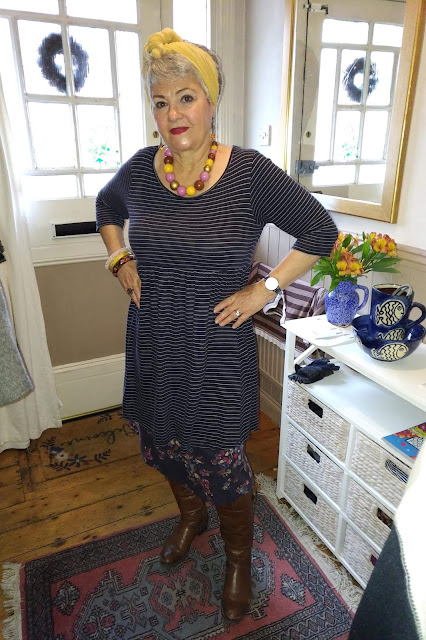 Everything charity shopped except the boots which are from Sainsbury's. East skirt; tunic from Primarni 1.00 rail. 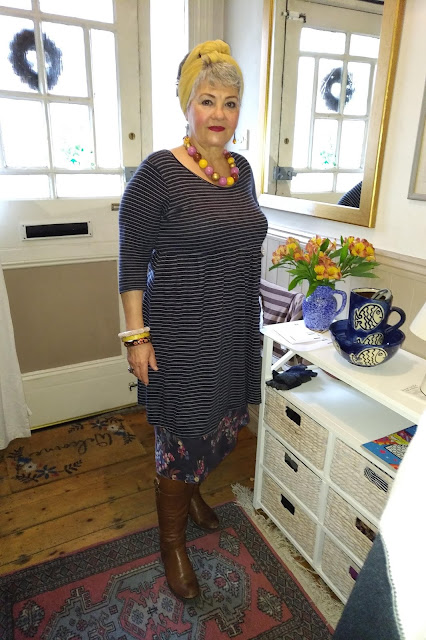 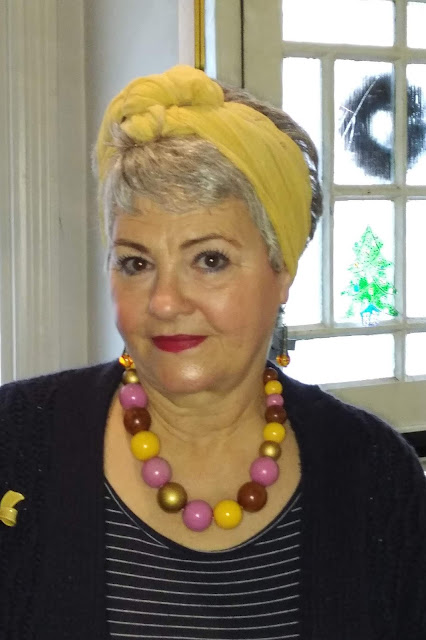 All jewellery charity shopped except Amber earrings from e bay. 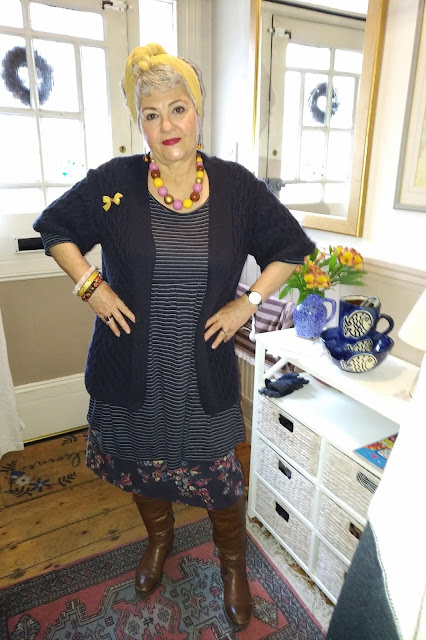 Going for the Gudrun Sjoden look again; short sleeved cardigan worn for warmth. The brooch was one of the 4 I bought a few weeks back from the Keech Hospice shop for 2.00.

I was thoroughly spoilt as usual in the present's department. OH bought me a printer and National Trust membership, some perfume and lovely soaps. I got three of the books on my wishlist; a new OS map of Bedford; (my old one was so creased and crumpled it had started to fall apart); a new purse; more smellies and soaps; new leggings from M&S and bras - these were much needed - another phone charging cable - also much needed and a zipped container of multi sized, coloured crochet hooks. My brothers gave me money. So, on the Thursday after Christmas I went into town to spend my Christmas money. I bought some blue velvet leggings and a dressy skirt in the M & S sale and spent 5.00 on some jewellery from the charity shops including the necklace below which I bought from Keech Hospice for 2.00. I still had a little left over so OH and I planned a trip to Northampton for a good post Christmas rummage! 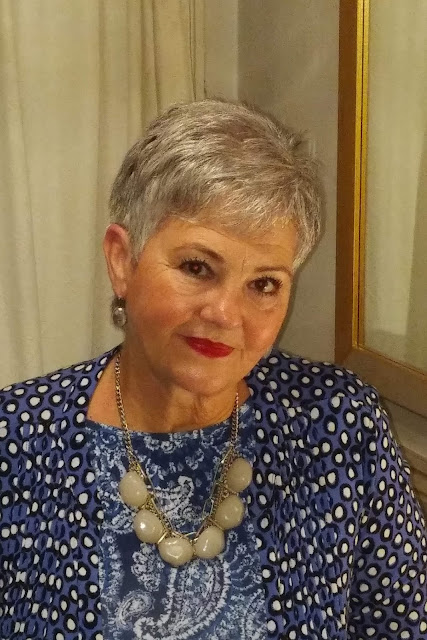 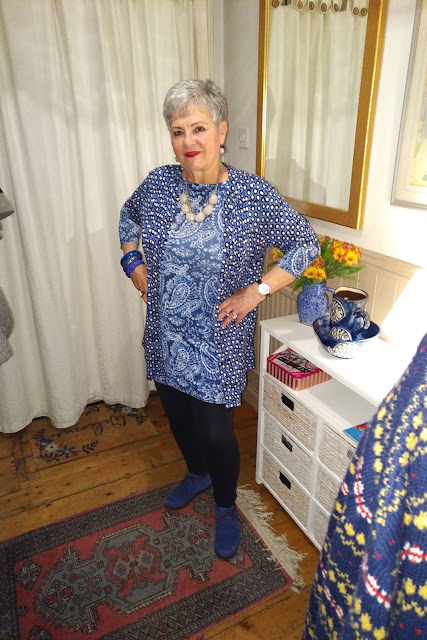 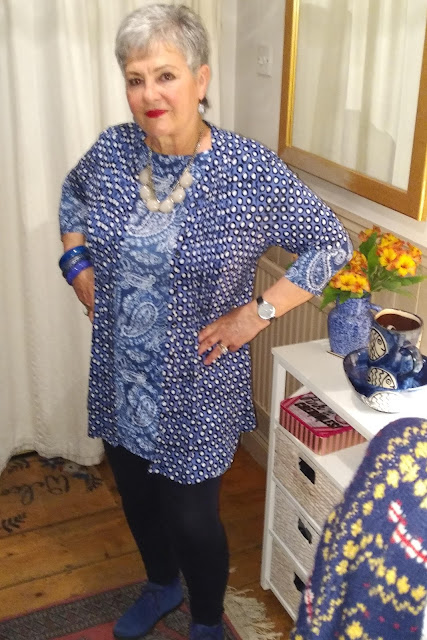 Had my hair cut on Friday. 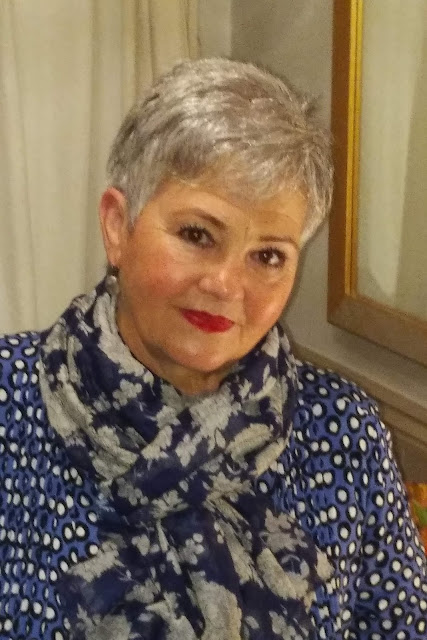 All jewellery and scarf charity shopped except the silver and moonstone earrings - present from OH many years ago.

We hadn't been to Northampton in over a year and there quite a few changes. Out of the twelve town centre charity shops only one was was closed. Age UK, one of my favourites, but there were two new huge charity superstores; Scope and the Salvation Army. They sold everything; furniture, books, Dvds and CDs, jewellery, bric a brac, clothes, shoes etc. One of these superstores had taken over the old Primark store. There was also a huge Development Aid charity shop called DAP which sold only clothes. We were a bit time limited by the time we got to these three so only had a quick look round.   I wonder if this is the future of charity shops here in the UK? Certainly the experience in Northampton was that they are getting bigger and taking over bigger premises. The two most recent charity shops in Bedford both have very large premises too. We have thirteen town centre charity shops in Bedford by the way. And within walking distance of the town another three and within a 3 mile radius another 5! And that doesn't include a large charity furniture shop in the bus station...

This is what I wore to go rummaging on Saturday...

Outerwear -  Fenn, Wright and Manson orange jacket, 8.00; Day Hospice shop in Kempston; scarf, beret and gloves all charity shopped. That's another one of the 2.00  brooches I bought in the Keech Hospice shop a couple of weeks ago. 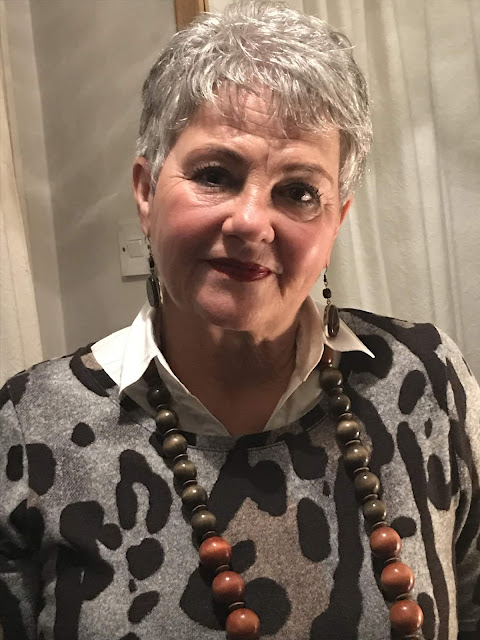 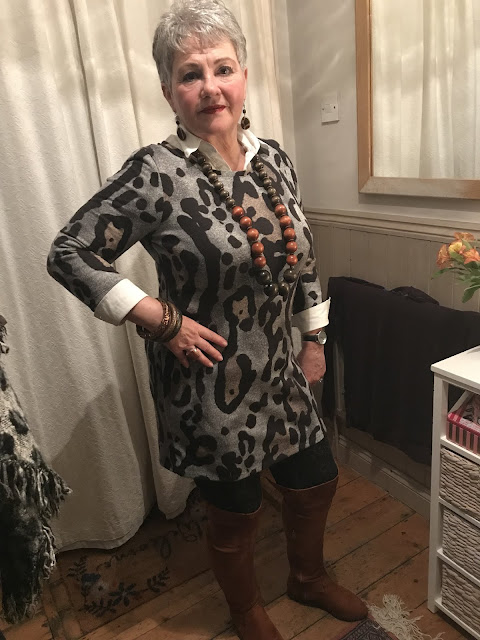 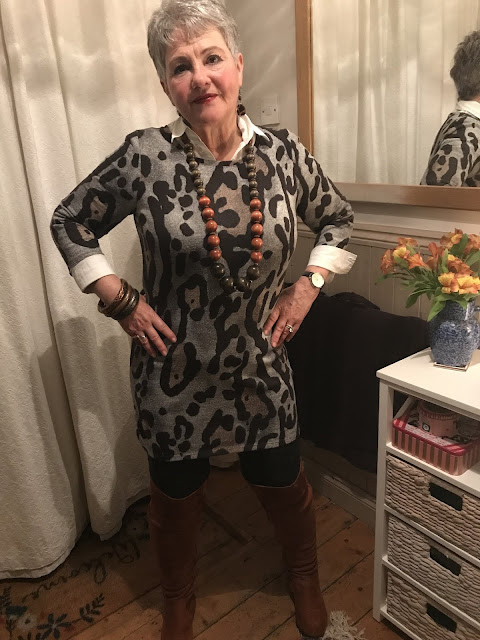 Wishing you all a wonderful New Year!