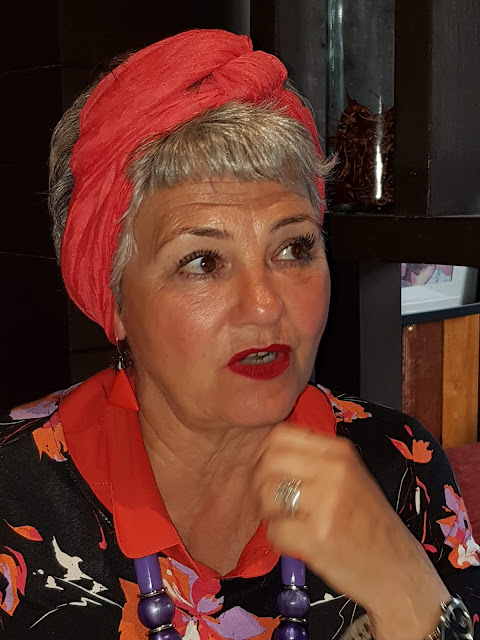 Gabbing as usual! Did I tell you that at our Ramblers Christmas Lunch all the tables had a title. Our table - full of women - was called 'The Chatterboxes'!

It was OH's birthday on Saturday 19th and we went for a rummage in Baldock and Royston in Hertfordshire.  Both are small market towns. I'd been before but OH hadn't. It was a glorious day. 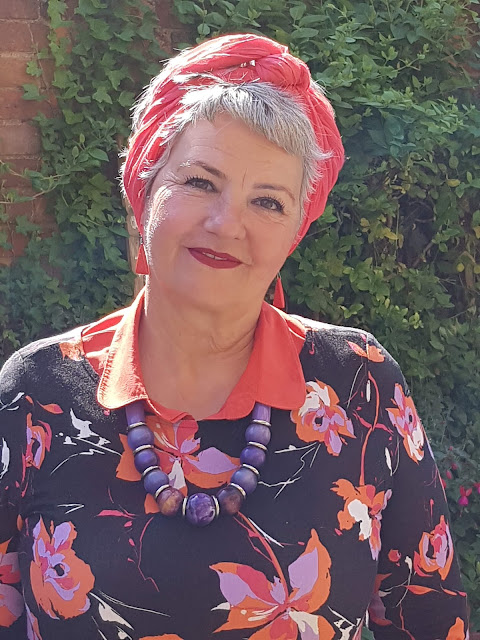 I bought these beads a few months back but the first time I tried to wear them the chain at the back broke. I crocheted a replacement in some purple wool and so far it's still holding the beads together! 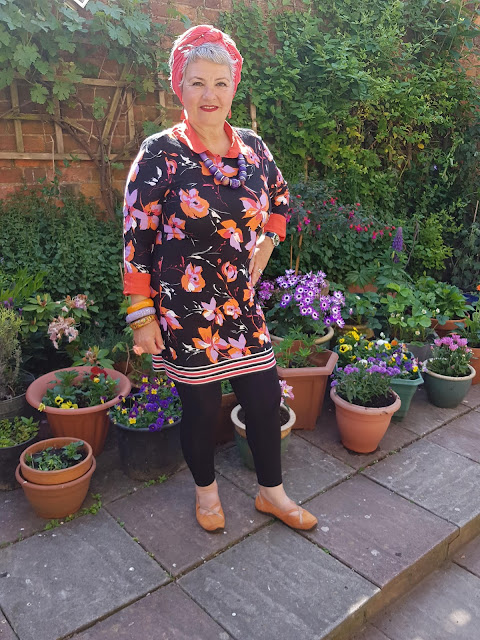 Things are blooming in the garden!

I tried to hold back on clothes purchases; too many clothes already blah blah, but I just can't resist a reduced or 1.00 rail. I bought two tops on the reduced rail in Barnardo's in Royston (6 charity shops)  for 1.49 each. I bought a green wool tunic for winter wear for 2.99 in Age UK and an earring hanger for 1.99.  I've hung all my black earrings and some of the silver earrings on the new hanger. At last, I have some space on my main earring hanger and can see more clearly what earrings I have. I just need to find another one for the the other side now... 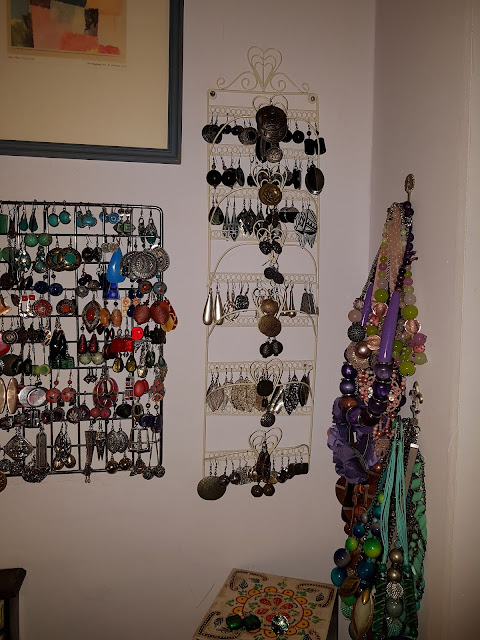 I also picked up these two brooches in Royston; the large bird brooch was 1.99 in the Wood Green Animal Shelter shop and the small pin, 99p in the Garden Hospice shop. The only thing I bought in Baldock (2 charity shops) was a pair of sunglasses to replace a pair I lost on a recent walk. 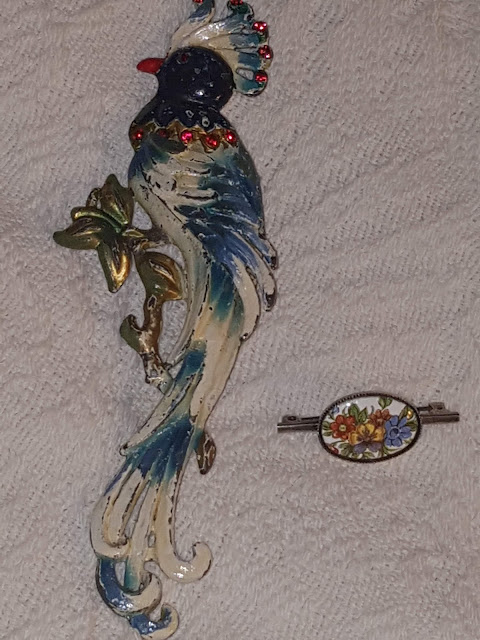 My brothers came over early on Saturday evening to watch the cup final. After that was over we went out for an Indian birthday meal. We had a lovely day and OH really enjoyed the whole thing. He also scored some great finds in the charity shops... 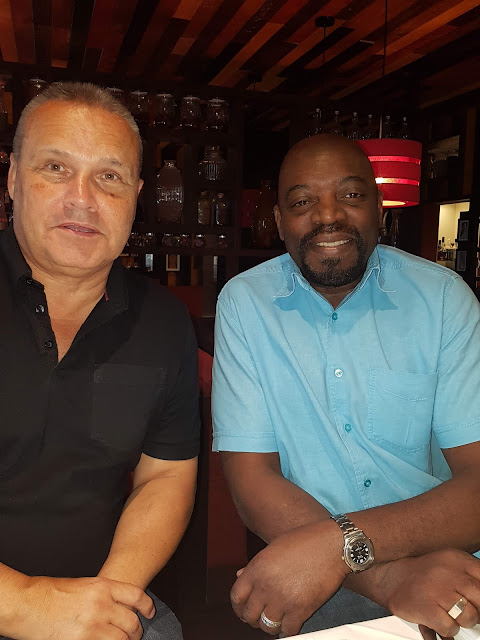 Baby brother and himself 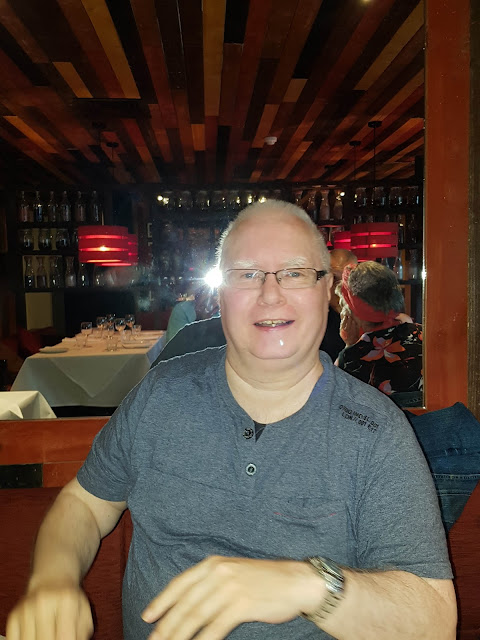 I invigilated at the University for two days. It's always an odd feeling to go back to where you once worked. I worked for this university for nearly 10 years and in the university sector as a whole from 1992; yet I don't miss it at all - and I enjoyed my job! I absolutely love being retired far more than I ever enjoyed working. Anyway, these were my outfits for those two days of work: 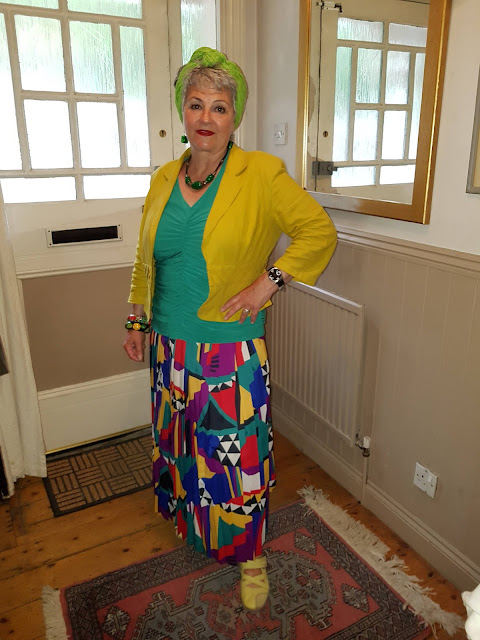 Everything charity shopped. The skirt was 1.50 from a charity shop in West Drayton; the yellow jacket was a Red Cross 1.99 find, I think. I cannot remember where the green top came from. The shoes were from a Donegal charity shop; 3 euros and the scarf bought this year in a charity shop for 1.00. 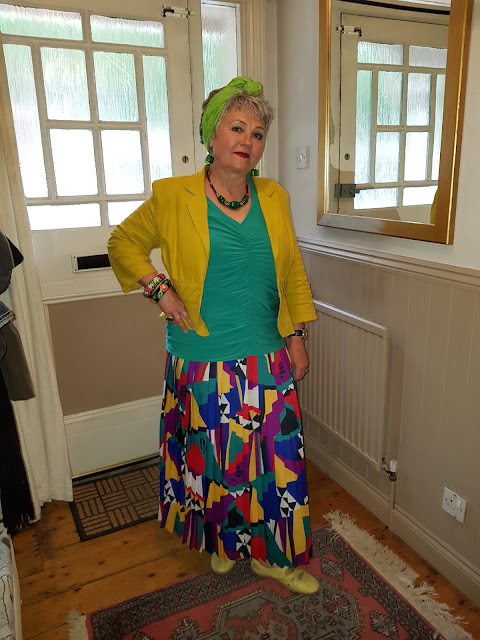 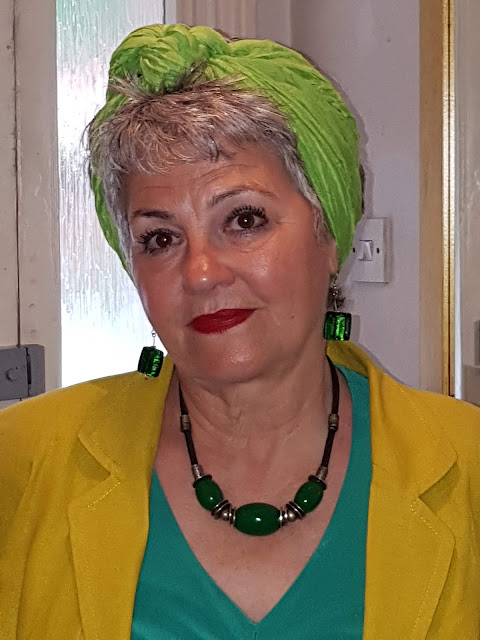 This necklace was 50p at a car boot sale years ago. 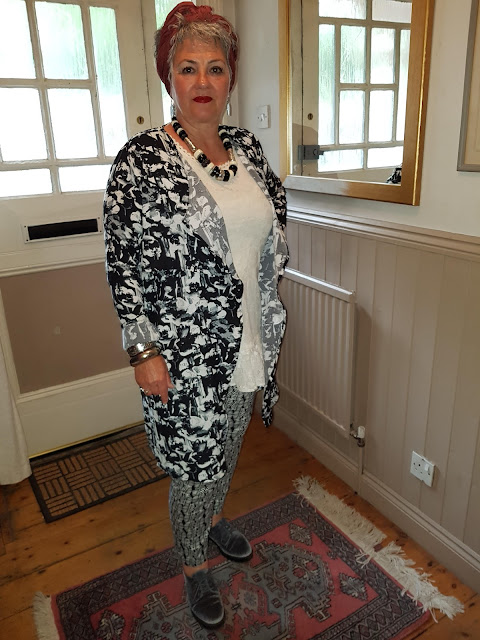 Again everything charity shopped except brogues from Primarni reduced to 5.00. 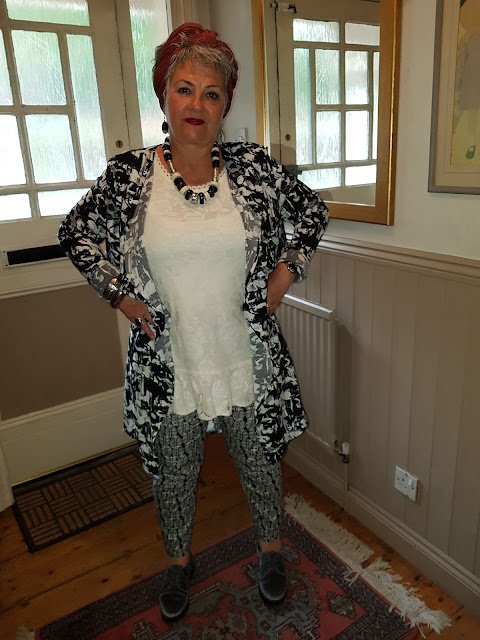 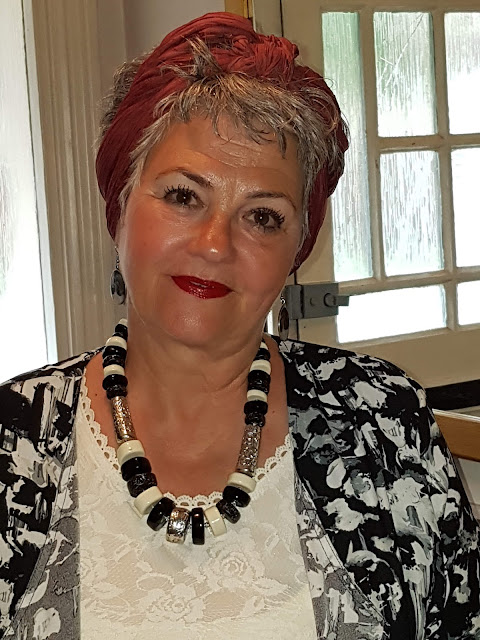 All jewellery charity shopped. I think this necklace was one of the 1.50 bargains I found in
the Sally Army in Rushden when Hilary was down on Bank Holiday weekend at the beginning of the month.

Black and White trousers No. 5 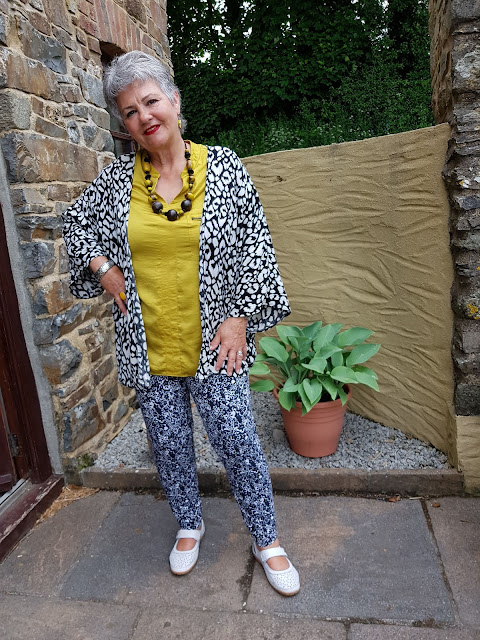 This was taken outside the front door of our holiday cottage in Polyphant, Cornwall.  We set off on Saturday morning nice and early. My daughter had bought a bike rack and we put it on my car with three bikes on it - I would walk, (not to Cornwall of course!) as always. The journey there was a nightmare.  A three hour delay on the M5 meant that despite setting off at 10 am we didn't arrive until after 5 pm. We stopped twice at service stations for a break but the worst of it is is that where we were staying was only forty plus miles over the Devon border. Had we been further on in Cornwall we may not have got there until even later. 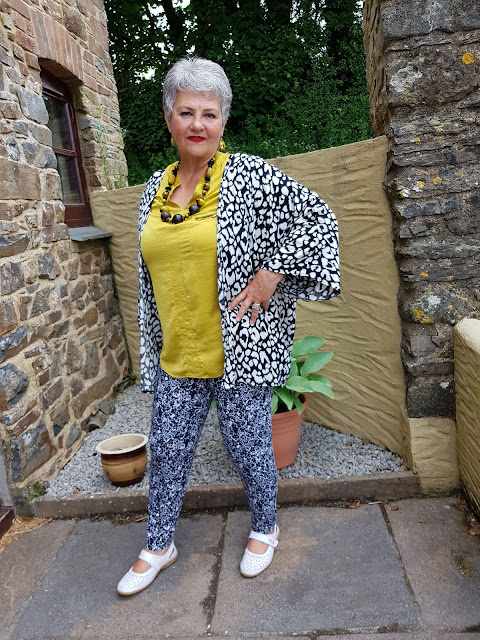 Everything charity shopped. This is the first kimono I ever bought and it's from Peacocks; the trousers are from F&F and yellow blouse from Dunne's Stores; charity shopped in Ireland.
I bought the white Mary Janes last winter in Oxfam in Bedford for 4.99. 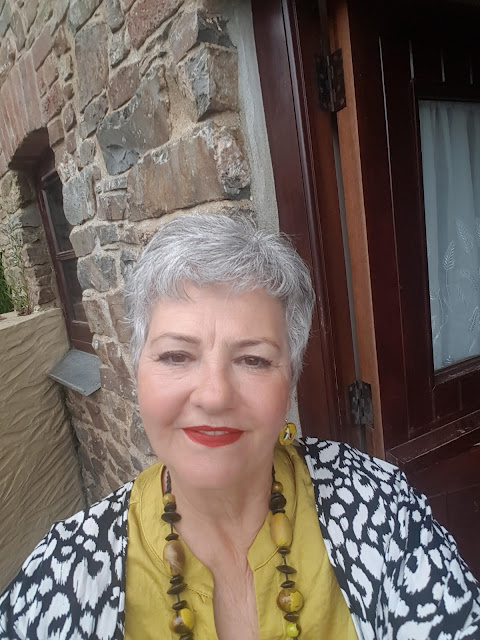 A not very good selfie...earrings bought from an Irish artisan and the necklace is charity shopped.

It's been many years since I was last in Cornwall. I went three times in the 1970s. Once with soon to be husband (now ex); once with same husband and some friends, and again with husband for a job interview at a hospital near Bodmin. I often wondered how life might have turned out if I had lived in Cornwall but I know my ex husband would still be my ex! I've been to both Falmouth and Newquay in the last ten years with Hilary and her family for a day out. Where we stayed this time was 5 miles from Launceston in Trevosper Cottages here. Highly recommended as a place to stay. The owners lived on the premises and were so thoughtful and helpful. We arrived to a proper Cornish Cream Tea, set out on the table.

What did we do in Cornwall? 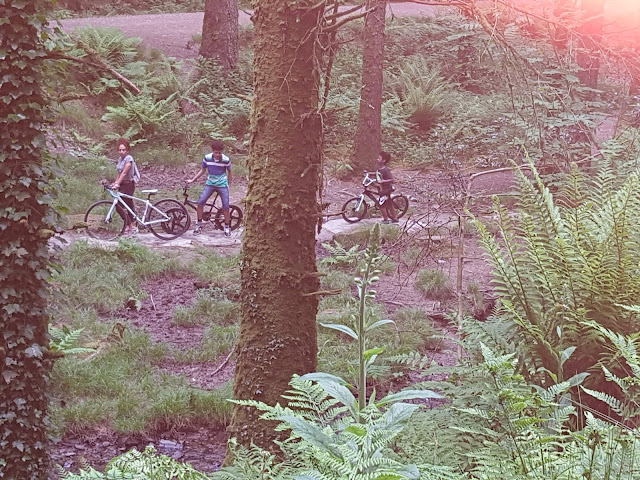 Biked the cycle trails in Cardinham Woods Nr. Bodmin. I walked, up and up and up...... 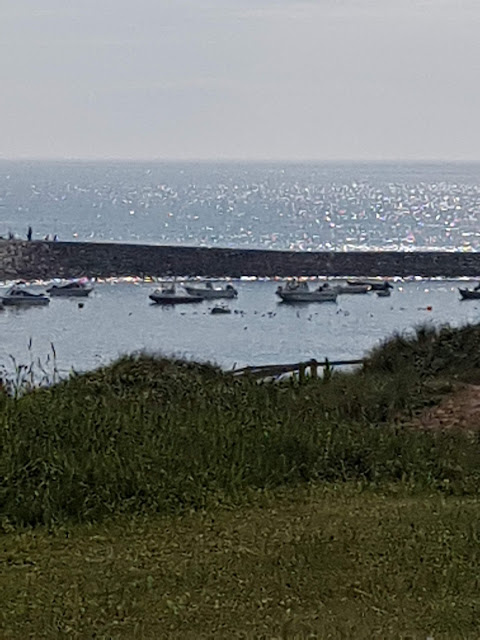 Went to Summerleaze Beach in Bude twice and I swam in the tidal pool; played rounders on the beach, buried one grandson in the sand, played football, ate fish and chips and ice creams. 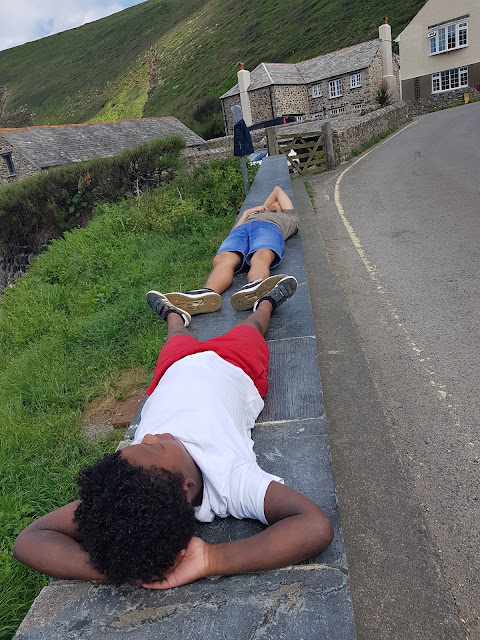 Our nearest beach was called Crackington Haven. It was a beautiful little place. Here the grandsons are chilling out. 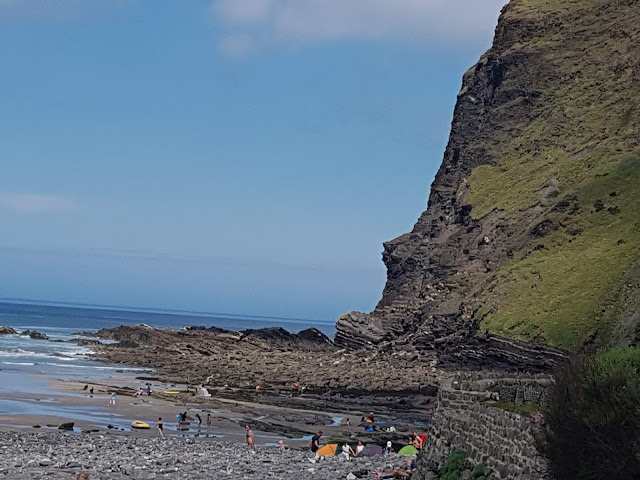 We walked to the top of the huge cliff to the right! 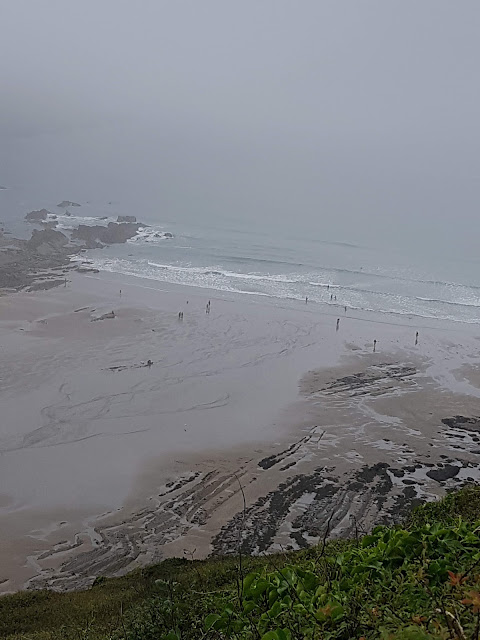 This was the view from the top...

More ice creams were consumed here as well as proper Cornish pasties. More games were played on the beach, rockpools were explored, waves were jumped. We've agreed we all want to try body boarding next  time we're at the seaside again. The sea was not too cold but I was the only person who ventured in for a swim. As we were so close to the Devon border Hilary came to visit and on our second trip to Crackington Haven she came too. 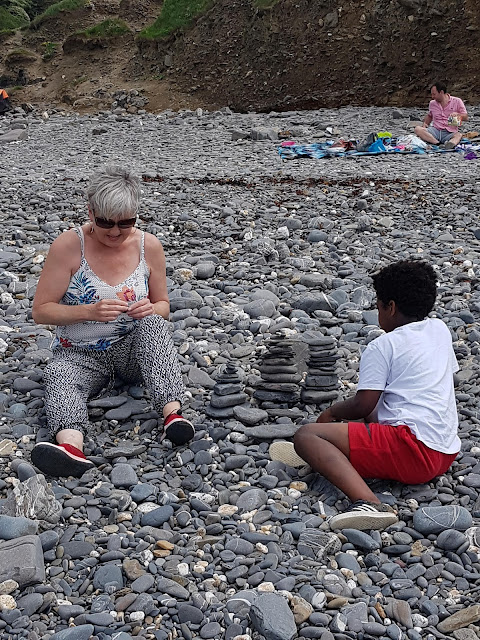 Here she is building rock sculptures with the youngest grandson...

In the evenings we tried to go for bike rides around the local lanes and fields. The Cornish lanes reminded me very much of Ireland; full of flowers and bird song. There was a prolific pink wild flower growing everywhere which I forgot to take a photo of and look up. If anyone knows what it is I'd love to know. 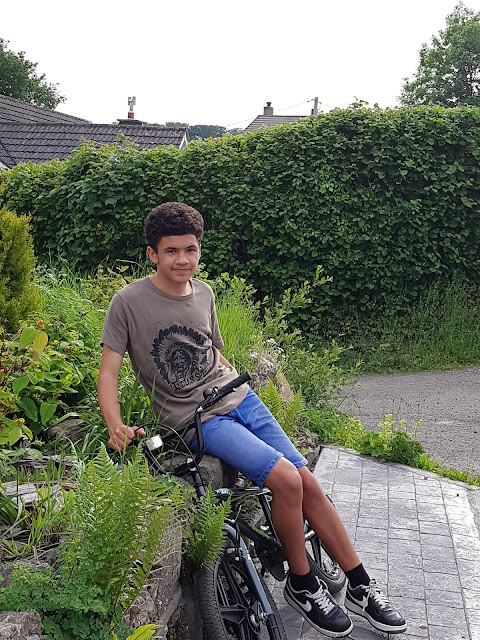 Middle grandson biked up hill and down dale!

The other thing daughter and I did was binge watch 'Downton Abbey' on DVD. Neither of us had watched it before and we were both hooked. We made it to the penultimate episode of Series 2 at the cottage and daughter has been catching up on A****n P***e since we got back! I'm going to look for the series in the charity shops and I bet I'll find some.

And talking of charity shops; Hilary and I went to Bodmin and Wadebridge and had a good old rummage. I bought a spotted blouse by 'South' found on the only 1.00 rail in a charity shop in Bodmin; I also bought two necklaces, a pair of earrings, a ring and three books.

It was a lovely holiday and the return journey was the complete opposite to the outward one, thank goodness! But it's good to be home.
Posted by Vronni's Style Meanderings at 20:49 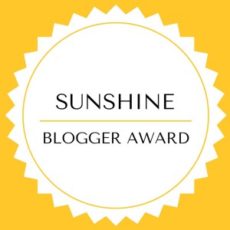 I retired in 2014 after 31 years of teaching in Nurse Education, Further Education and Higher Education. I live in a market town 55 miles from London with my partner. I have two grown up children and 3 grandchildren who range in age from 10 to 25 years. I love charity shopping, reading, walking, art, music, crochet, visiting my mobile home in Ireland and spending time with my family and friends in both England and Ireland. 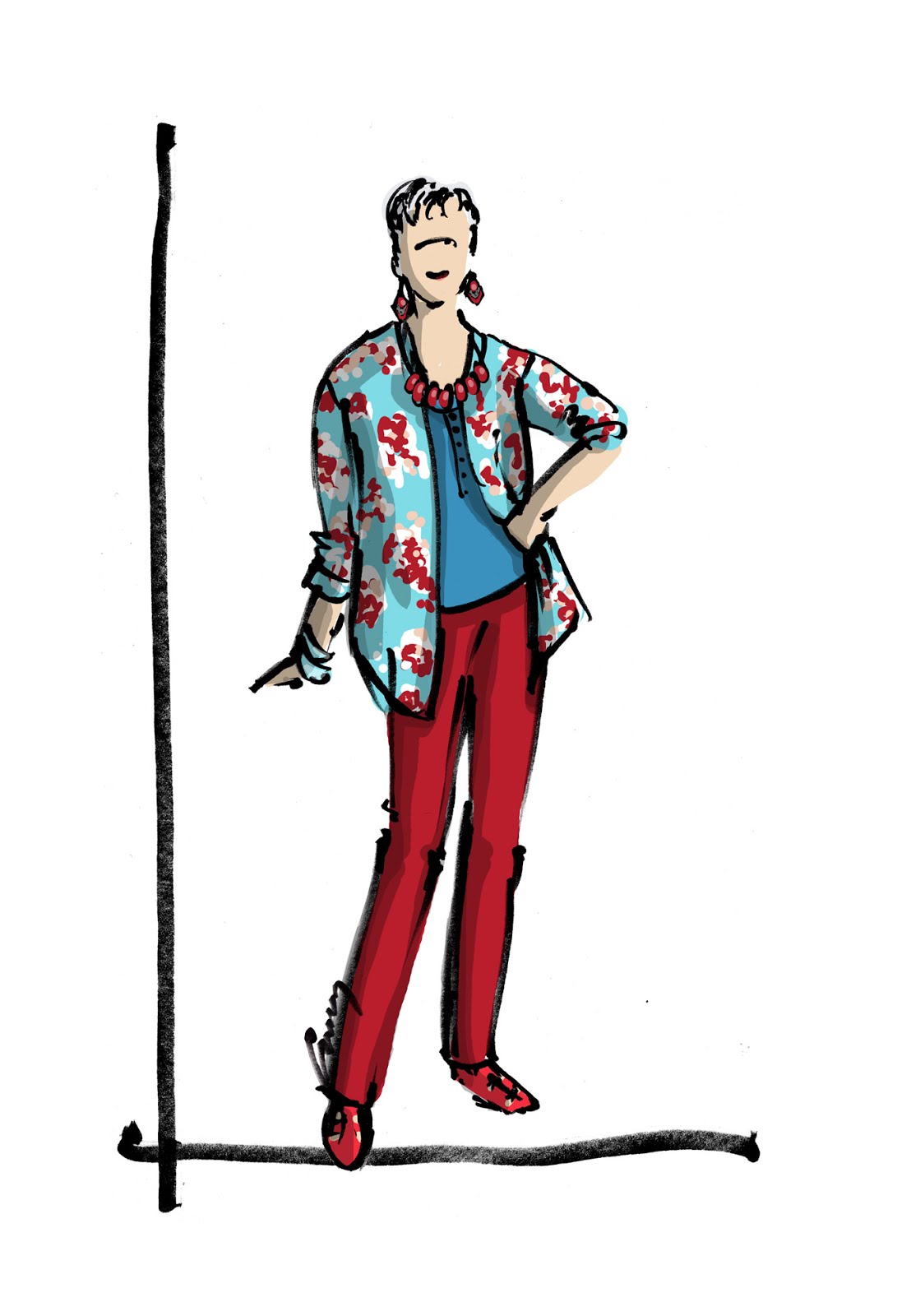