June 27, 2017
Our heatwave finally departed last Thursday. On Wednesday it was 31 degrees and by Thursday it was much cooler at around 20 -21 degrees, cloudier and with a slight breeze. Thank God, I said.


This was last Tuesday's outfit. I just wore the jacket to and from my volunteering and stayed sleeveless the rest of the time - bingo wings and all! 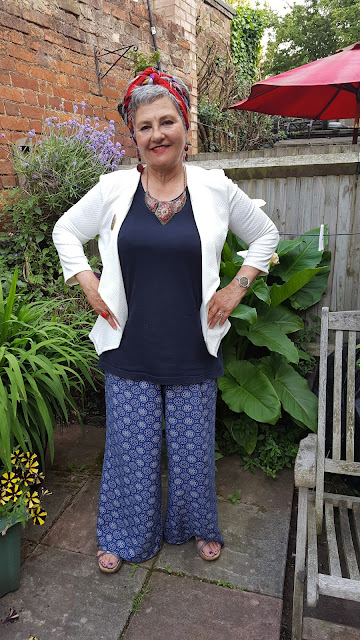 Everything charity shopped except the watch (present) and sandals which I bought in the Clark's sale about six or even seven summers ago. Note I'm not wearing any bangles in these photos but see below... 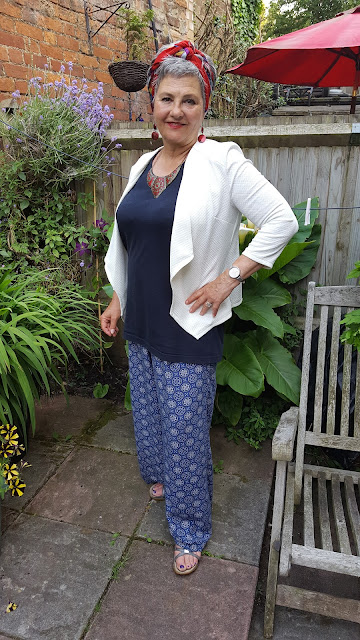 The cotton trousers are by F&F, the jacket is by M&S and charity shopped in Kettering just before Christmas 2016. I've had this sleeveless navy top for donkey's years...

On Monday and Tuesday I volunteered as usual at the Red Cross and the Food Bank. When I was at the Red Cross on Tuesday afternoon I finally began my training on the till. Whilst the manager was training me, my colleague; who had been previously been on the till went out to the sorting area and took over from me. I'd been sorting the jewellery.

When I got home from the shop I realised I wasn't wearing my bangles. The last time I'd seen them they were on the sorting table at the shop; I always take them off as they get in the way when I'm writing the price labels. Yes, you've guessed it - my colleague had priced them up and put them out on display! Luckily, they weren't sold and I picked them up the next day.

I had my hair cut and eyebrows done on Wednesday and ran a few errands in town which included a visit to the 3:16 shop. I bought a tunic and a couple of winter items for 1.00 each. When I finished I came home and stayed in the coolest room in the house reading.  I didn't do the Weds evening Summer Solstice walk as it was still too hot at 8.30 pm.


I managed to get out for a walk on Thursday and walked almost 6 miles in a much cooler temperature. 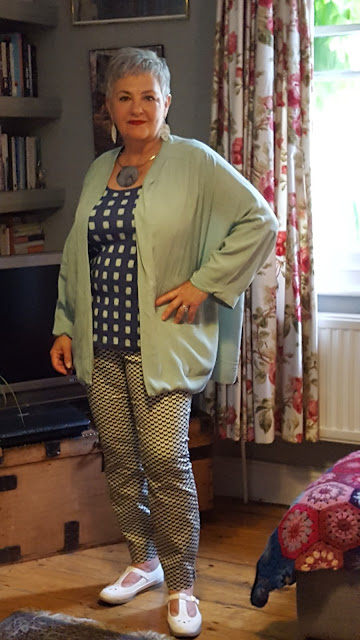 This was Thursday's outfit - everything charity shopped except the shoes which are from local retailer PJ shoes. Trousers; H & M; t shirt; 1.00 rail somewhere; green kimono jacket from a 50 p bin in a charity shop. What a bugger it was to iron - I can see why someone donated it! I've donated it too... 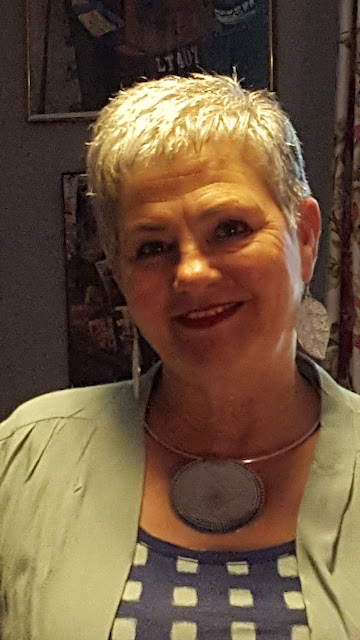 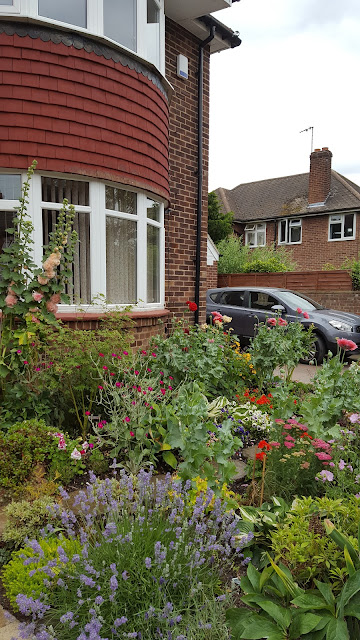 I passed this colourful front garden on my walk and had to take a picture of it.

On Friday the weather was cool again so I went for another walk after the school run. I started out from Great Denham; having had a look in Barnardo's first, then walked to Kempston Mill: along the river Great Ouse to the Queen's Park area of Bedford. From there I walked back to Great Denham along the the other side of the river; 6.42 miles in total. Queens Park has a beautiful Hindu temple: 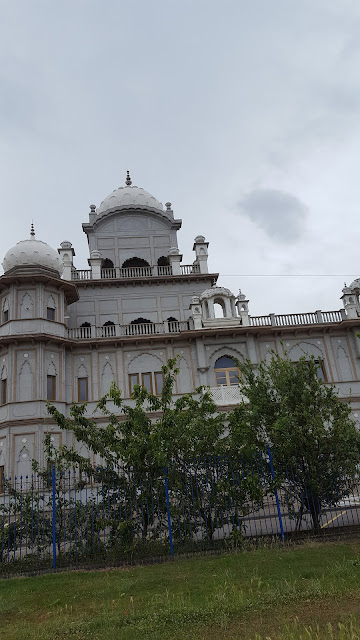 And on the return journey I saw these magnificent, huge willow trees: 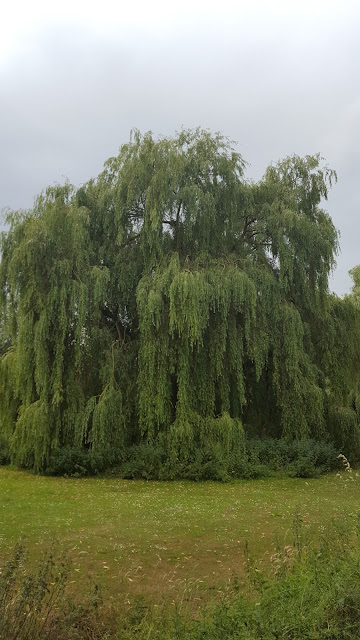 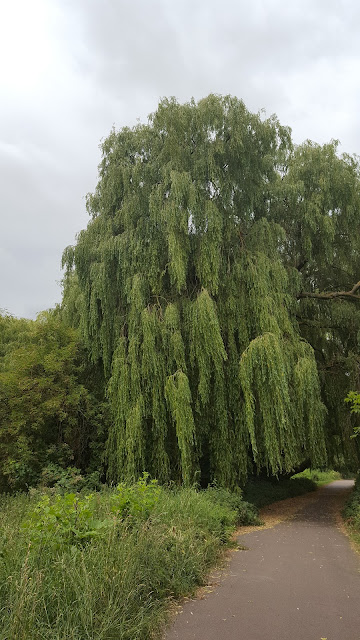 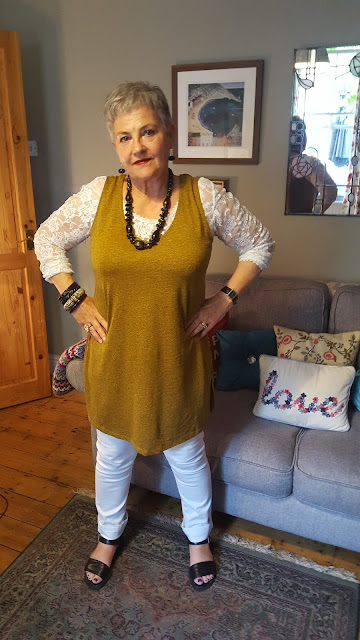 Everything charity shopped. The yellow tunic is from the 3:16 shop on Wednesday and I bought the beads in Barnardo's. Jeans from Red Cross charity shop. 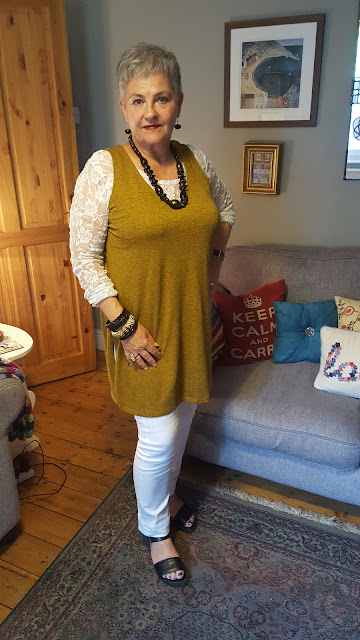 I can't remember where I got the white lace top but I bought earlier this year somewhere. Sandals also charity shopped. 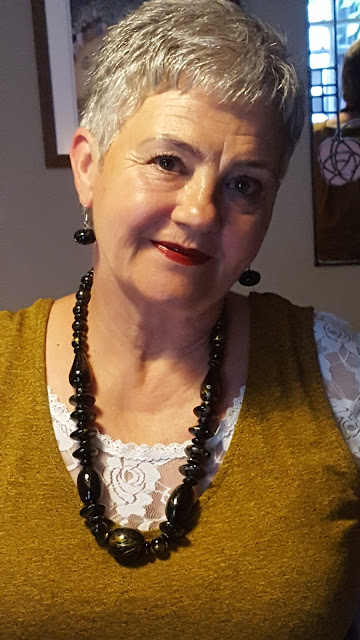 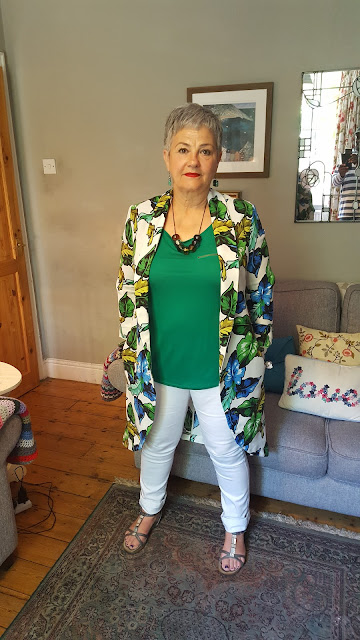 On Saturday OH wanted to go for a rummage. We had thought of going to London where we could fit in a visit to his mum but we ended up going to Luton and Dunstable instead!

Everything I'm wearing above is charity shopped except the sandals - my comfortable Clarks. The kimono is from Primarni; the top is a M&S one and white jeans are from Matalan. 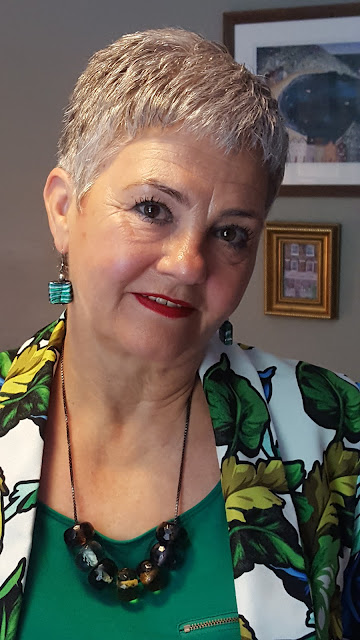 All jewellery charity shopped except the earrings - from Sainsbury's. My jacket was much admired by total strangers. They were very surprised when I told them where it came from. When I was last in Devon visiting Hilary I found another similar one - also by Primarni;  it had a beautiful print on it and Hilary bought it.

Of course you want to know if I bought anything. I did. I bought some interesting mustard colour cotton trousers in the Red Cross for 1.99; a blue kimono jacket from the 1.00 rail in Keech Hospice and some padded hangers; a pair of earrings and a yellow sleeveless top for 2.00 in Age Concern. (The earrings seem to have disappeared. I remember taking them out of the bag at home but haven't found them since - they'll turn up somewhere). There were only six charity shops in Luton town centre which I found surprising. Bedford is a smaller town and has twelve. Dunstable had about five charity shops and I din't buy anything in them. I don't think I will be rushing back to Luton or Dunstable for some rummaging any time soon... 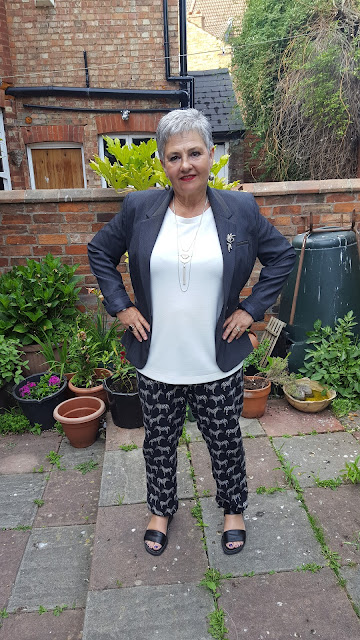 On Monday I stayed at the Red Cross until it was time to pick the grandchildren up from school. Two of the volunteers were off to celebrate Eid and the manager had a day off leaving just myself and the assistant manager. There were so many donations to sort and I served at the till, too.

This is what I wore. Everything is charity shopped except my underwear - and you're not seeing that! Jacket; Next, 1.00 Red Cross, zebra print trousers from Barnardo's last week: 2.49. Next top; charity shopped last summer. 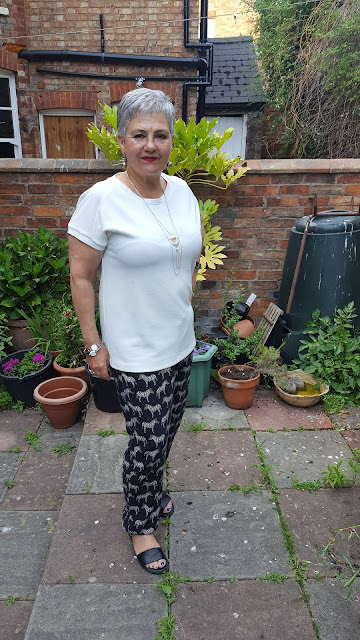 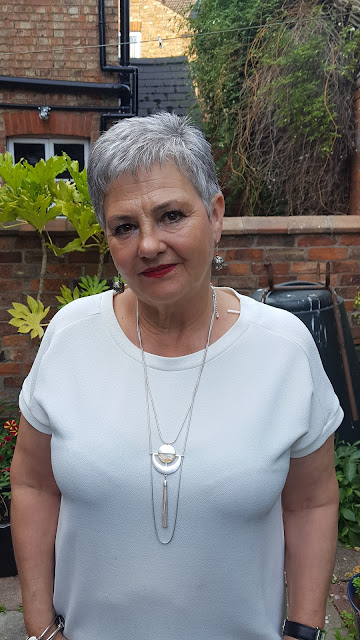 This is going to be my last post for a while. On Saturday I'm going to drive to Holyhead and catch the ferry to Ireland on Sunday morning. I should reach the van about 4 pm having stopped off at Lidl to do some shopping. As I've said before the internet connection at the site is both weak and intermittent so I doubt that I'll be able to post more than once every couple of weeks and then only when I'm somewhere with free wifi.

I'm so looking forward to the next couple of months where I will just be chilling out; reading, crocheting, walking; visiting family, sight seeing and a bit of charity shopping of course! I'm looking forward to having a few visitors to stay. I shall miss my children and grandchildren and OH but I will see them in Ireland. Whatever transpires I'll be back in September so I hope you all have a wonderful summer.