It seems like a long time ago since I last posted but it's only been 24 days. In that time I've been to Donegal for two weeks and my cousin from Ireland came to visit me here in Bedford. I have had a wonderful three weeks and it was also good to have a break from blogging! I did miss everyone else's blogs and have tried to catch up since I returned.

I'm going to dedicate this part of the post to Fiona of 'Made in a Muddle' here. Fiona has a mobile home in France and asked me to do a post about about my mobile home in Ireland - so here goes.

The site we stay at  is at the top of a hill and has about 180 mobile homes in total. It is split into two separate areas by a road. There is a children's playground; a green play space with trees and tyre swings; a football/tennis/basketball pitch; picnic sites and a hut for wet weather activities, on site. There are also woods to the rear of the site, two nearby lakes and lots of local beaches.  Our mobile home is on the upper slope of the hill and at the end of a row. It is a truly beautiful spot and we are surrounded by mountains.

This is 'Ruby Super' hereafter referred to as the 'caravan'. She is a static caravan or mobile home made by Atlas and was originally made in the mid to late 1990s. I bought her in April 2014 after I retired in March. I had the wooden decking/patio and base around the caravan made especially. Ruby Super has three bedrooms but can sleep eight people as the seating area in the living area pulls down into a double bed. 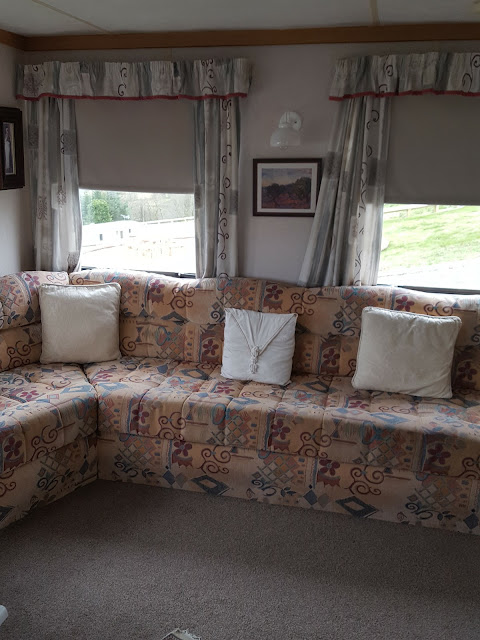 There is no central heating but I do have a gas fire in the living room and two other electric heaters. However, electric voltage is is limited in a caravan and you learn pretty quickly how many electrical items can be in use at the same time. When the electricity is 'tripped' it's only a short walk to the decking to 'throw' the switch. As it can get very cold, in the evenings especially, I always have a good supply of throws and blankets which are stored in the large basket. 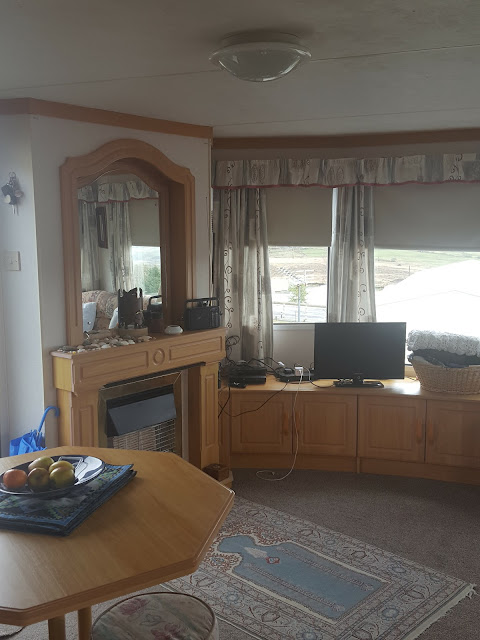 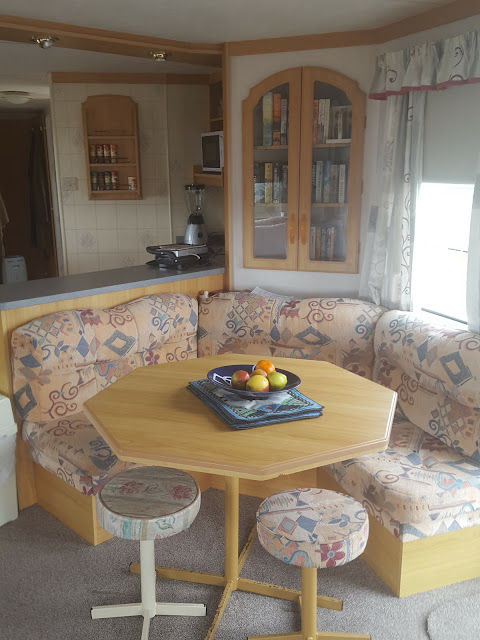 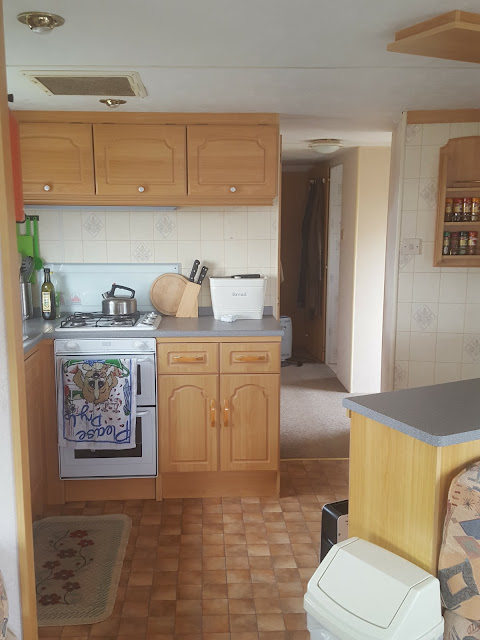 I like the layout in the caravan  - apart from the sleeping areas and bathroom, everything else is open plan. From the kitchen window and two of the bedroom windows I can see St. John's Point which is one of the longest peninsulas in Ireland.  The peninsula is separated on either side by McSwyne's Bay and Inver Bay; which feed into Donegal Bay and the North Atlantic Ocean. On a clear day, I can also see Ben Bulben mountain  across Donegal Bay in Co. Sligo. If you look very carefully at the picture below, in the distance on the left hand side you can just make out Ben Bulben. There were very few clear days on this trip but when it is clear it's as if I can lean out of the window and touch the sea! 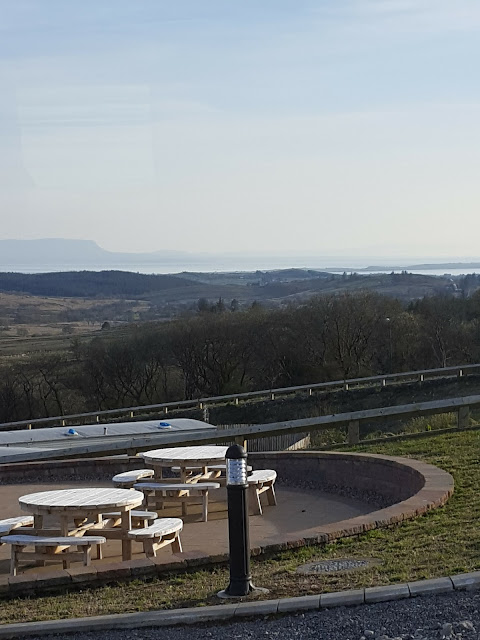 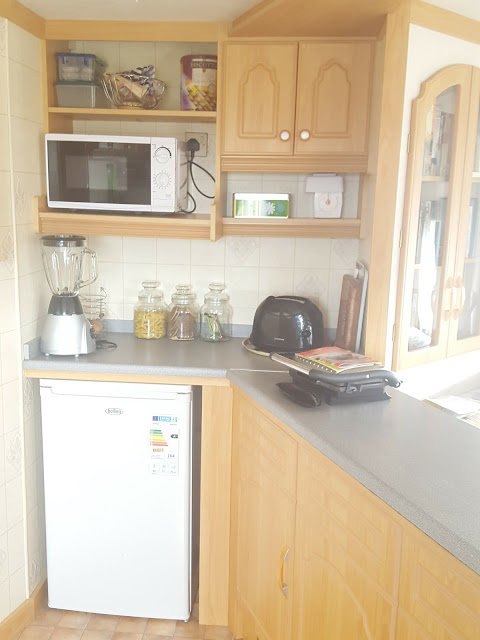 The kitchen is compact but has lots of storage space. I have no washing machine but there is a laundry on site with two washing machines and two tumble dryers. They are not free; unfortunately... 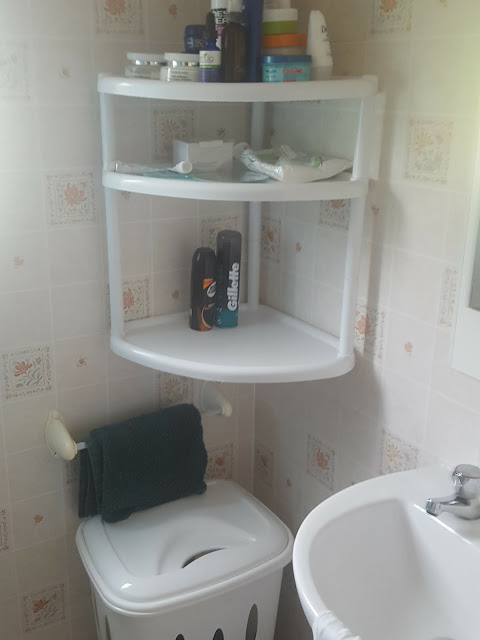 This is the bathroom. There is a shower to the left of the photo. 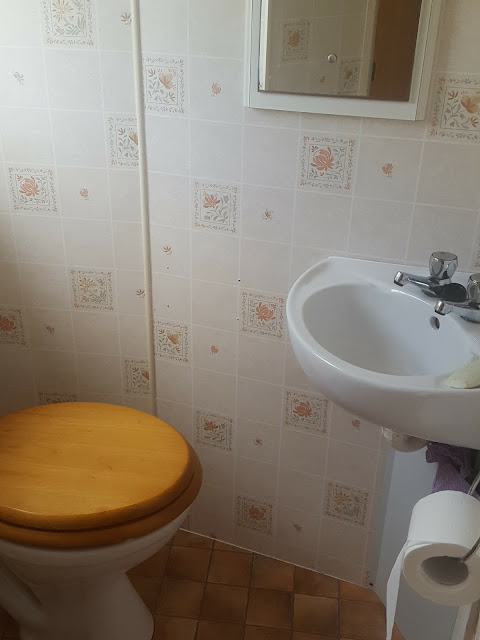 There is a separate loo 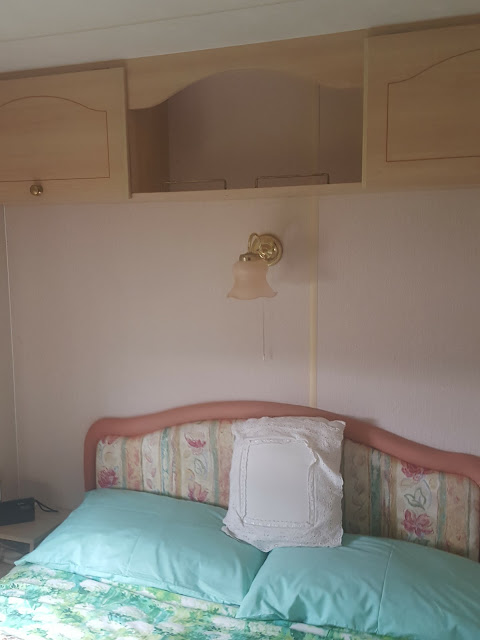 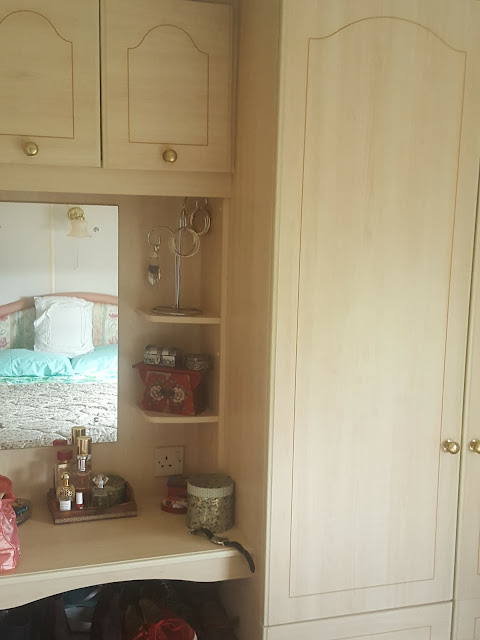 One double bedroom complete with another wardrobe of clothes, shoes, jewellery and perfume! 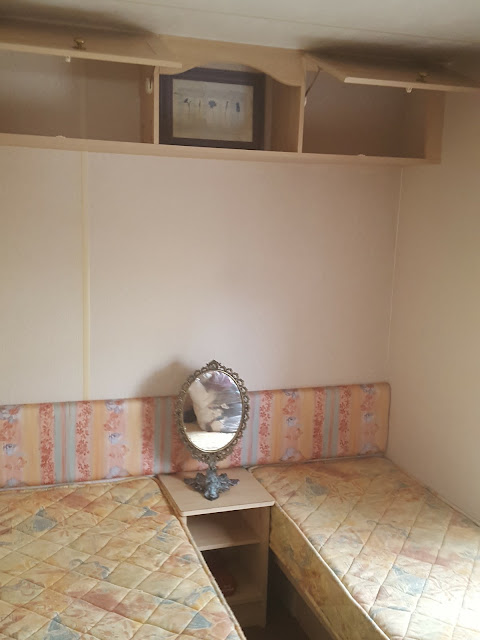 When we've been away from the caravan between September to Easter, the caravan suffers from mildew. We leave plates of salt and humidifiers (non electrical) bought at hard ware shops to help with the mildew. This year we've left the blinds up and curtains open to maximise any sunshine and warmth; until I return in July. The caravan heats up really quickly when it's sunny.

We also have to pack any clothing or textiles, including bedding, away in plastic bags to avoid them becoming mildewed. If we were able to visit more frequently this would be less of an issue. So far though, it has been the only problem we've experienced and we love Ruby Super. When I return in July, I shall be applying weather protection stain to the decking and washing the outside of the caravan with a mop and bucket. Thanks to Fiona for alerting me to this - it was in the terms and conditions,  but I had completely missed it!

Are you ready for some outfit posts? Not many I'm afraid; I was too busy having a good time! 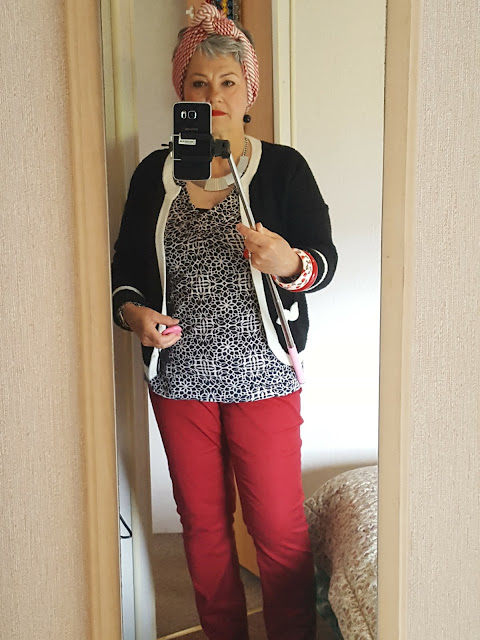 I only managed one selfie with the selfie stick. Everything charity shopped. Cardigan; 50p at a jumble sale, top; £1.00 rail somewhere, can't remember where I bought the trousers. 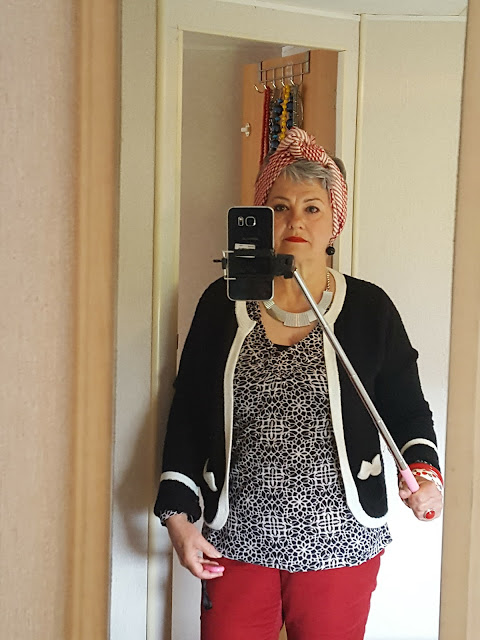 All jewellery and headscarf charity shopped.

When OH arrived we spent a day in Derry. 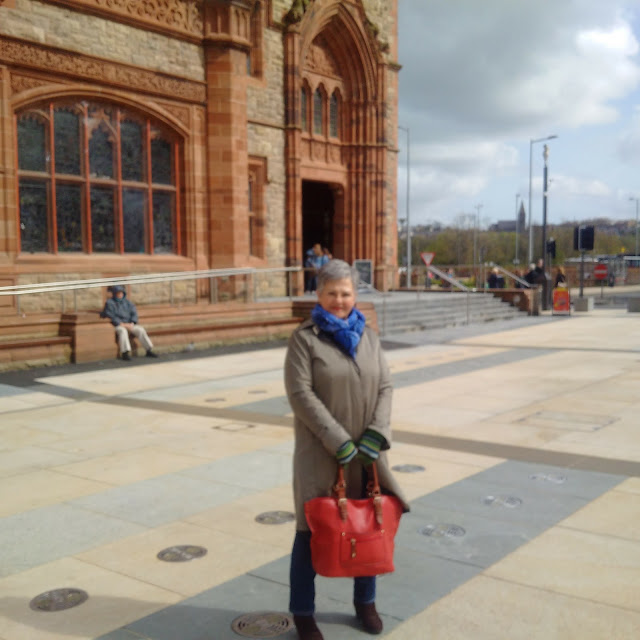 Taken outside the Guildhall in Co.Derry. Everything charity shopped except the bag; online retail and the boots; Christmas present. The mac is by Max Mara and I bought it for 4 euros at my favourite charity shop in Killybegs, Co. Donegal. I also bought a pair of brown trousers and a green and black pair of trousers there for 2 euros each and a tunic by Apricot for 3 euros. It was a chilly day in Derry hence the gloves and scarf! 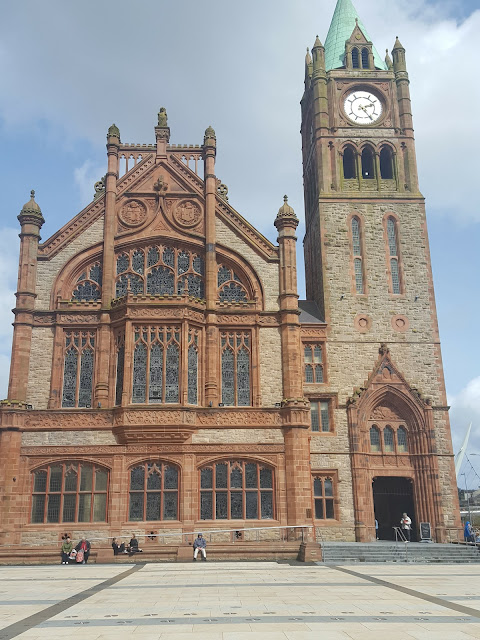 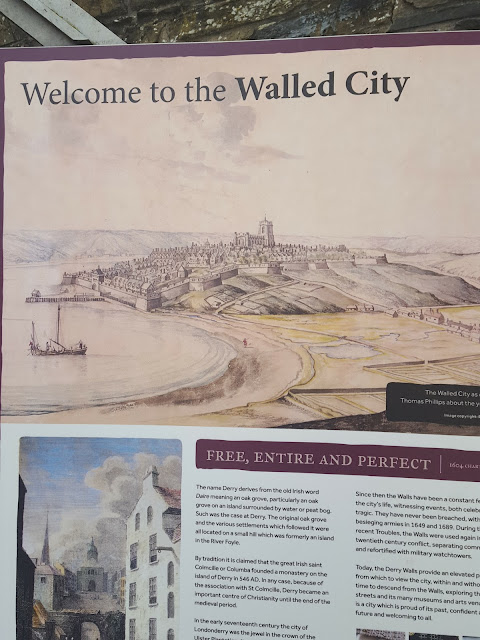 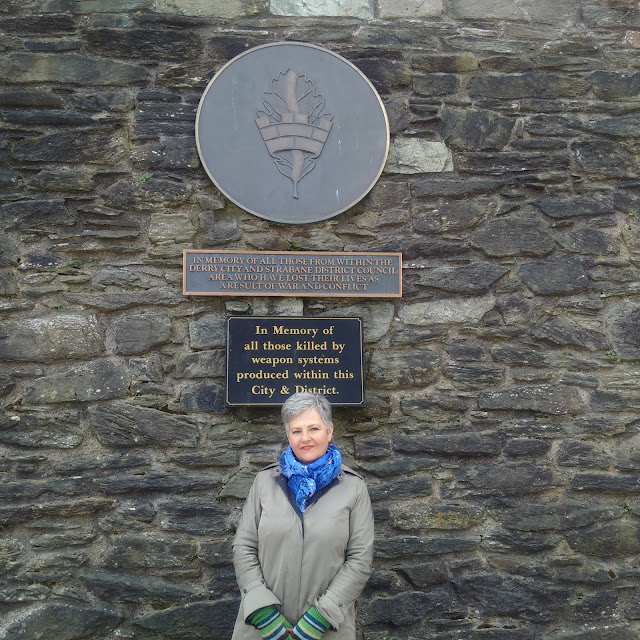 I'm standing against the wall that once surrounded the city of Derry. This plaque is in memory of all those who were killed  by weapon systems within the city and district of Derry. 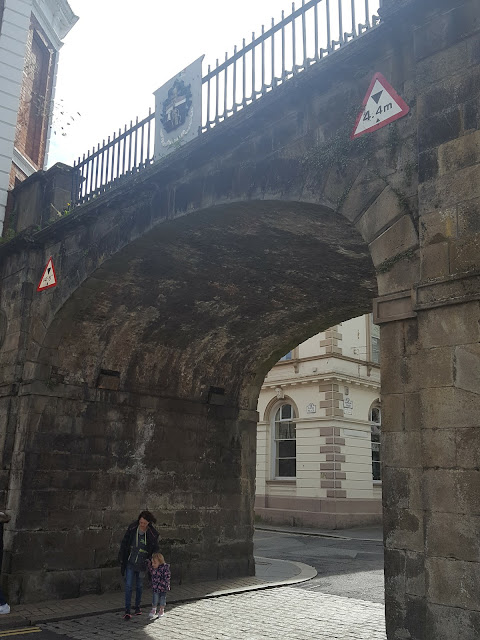 Another part of the wall.
OH and I had a really good rummage in the charity shops of Derry on Easter Saturday. There were nine in total that we found and only one was closed. I was quite restrained for a change (!) and bought a necklace in a hospice shop and a Desigual tunic top in the Red Cross shop; where I got discount bringing the price down from £6.00 to £4.80! On the way to Derry we stopped at Ballyboffey to have a rummage and I bought a pair of trainers and a pair of walking shoes for 99 cents each. In the Donkey Sanctuary charity shop I bought a ring for 5 euros and a couple of books. 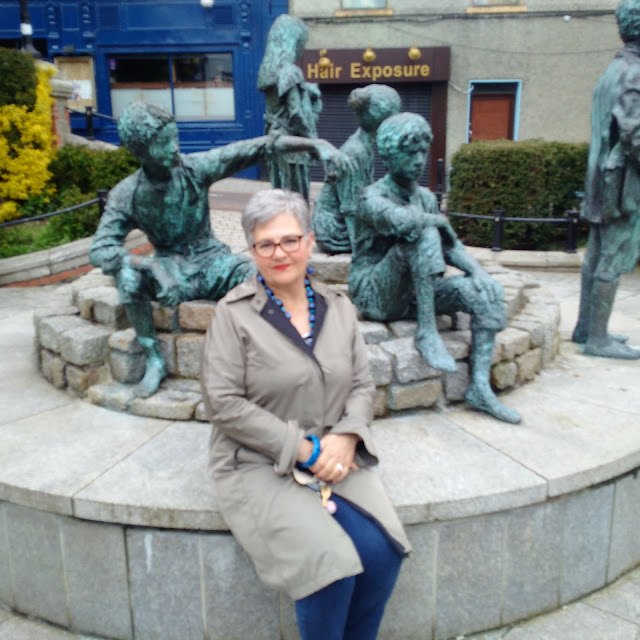 This picture was taken in Letterkenny, where we stopped for a meal on the way back from Derry. I have no idea what the sculpture is and there was no information about it that I could see.

We also spent a day in Sligo where we went rummaging as well as visiting family. I bought some white jeans for 2.50 euros and a couple of bangles. I also visited another cousin and his wife in Mullaghmore, Co. Sligo before OH came out. This the view of the Atlantic from their garden: 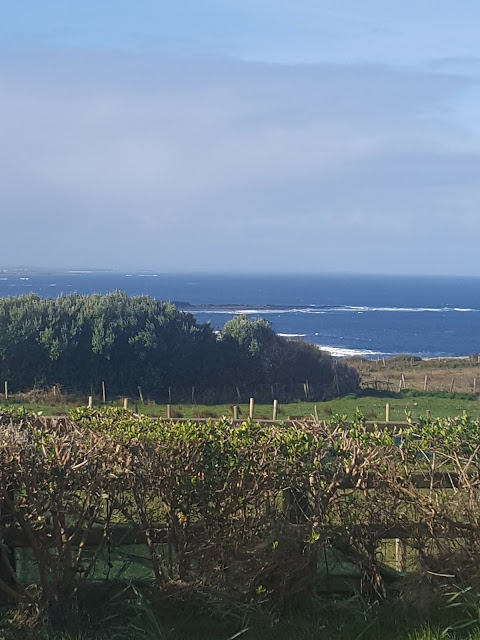 On that occasion my cousin's wife, Martina and another cousin Caroline, and I, went walking around the base of Ben Bulben. It was a beautiful walk and we had two dogs with us who were very well behaved throughout.

And other than reading, eating, sleeping, a bit of walking, listening to the radio and starting (finally) a new crochet blanket, I did very little else!