I'm almost scared to type this in case I tempt fate; the comments problem seems to have gone- except that I have lost all my previous comments. This is very sad as I have had many lovely and very amusing comments, but when you switch from Google to Blogger comments you lose them. I just have to accept it and move on!

What is good is that several people have said they had previously been unable to comment - but now they can! 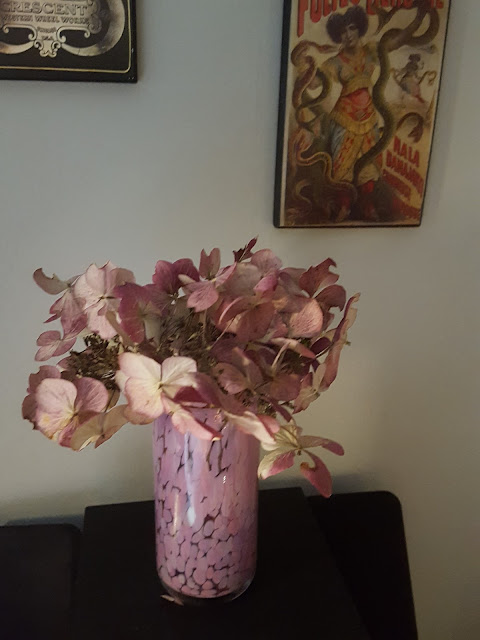 Here's some of my dried hydrangeas in a lovely Maltese glass vase my friend gave me. Her son's funeral is on 5th July and it's going to be a very sad occasion, but we will celebrate his life in the best way we can.


I had a pretty hectic week last week hence no posts.  On Monday, I did the school run, then went to volunteer at Save the Children. On Tuesday I was at the food bank and went walking in the afternoon. I got slightly lost and ended up walking over 9 miles. I was very tired, went to bed early and slept like a log! I went walking with the Ramblers on Wednesday and got very wet as it rained all morning. We did over 7 miles, nevertheless.  I did a little bit of rummaging  in town in the afternoon and picked up a few nice items.

On Thursday, I was a poll clerk at a local polling station. My day started at 5 am and I was back home at 10. 20 pm. A long day but very enjoyable. (I am devastated at the outcome). On Friday,  it was the school run and food shopping in the afternoon.

On Saturday, we went to Leeds to spend the weekend with my OH's army buddy and his wife.
My OH was in the army for 6 years in the 1970s and stationed in Germany. He made some very good friends there and in 2013 we attended a reunion of his battalion in Southport.  It was the first reunion he had attended (oh the power of Facebook!) and he caught up with people, some he hadn't seen for over 40 years! Later in the year we went to stay with one such friend and his wife and we spent this weekend with them again - and a very good time was had by all. I even managed to visit a couple of local charity shops whilst we were in Leeds.

This  week was less busy, thank goodness. I was at Save the Children on Monday; haven't yet had the chance to operate the new till but I was able to help my colleague log in! 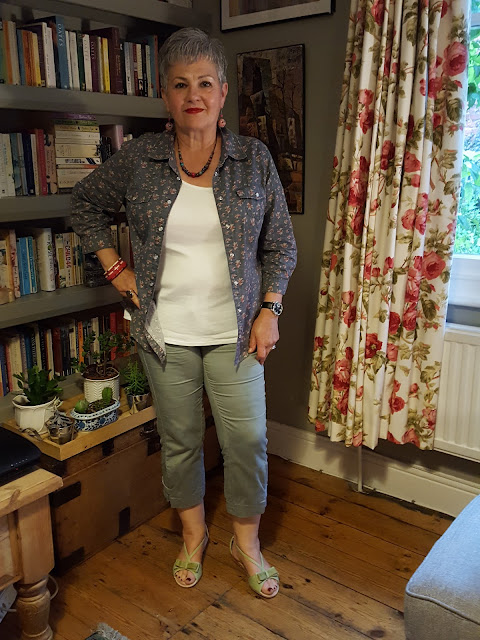 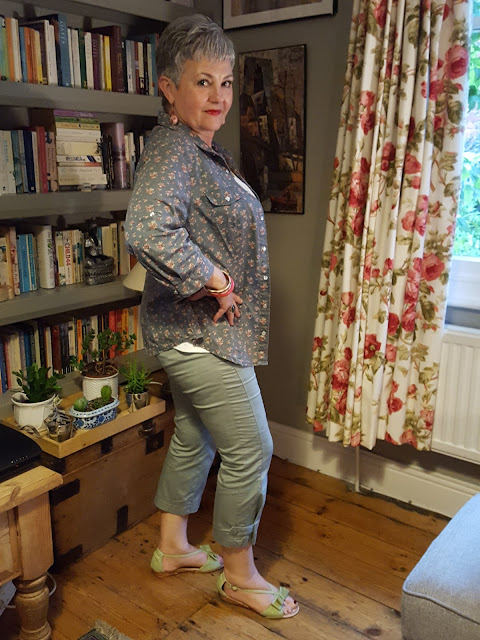 Bangles and watch charity shopped. Earrings from one of those shops that sell everything and the necklace was a present from my lovely next door neighbour. 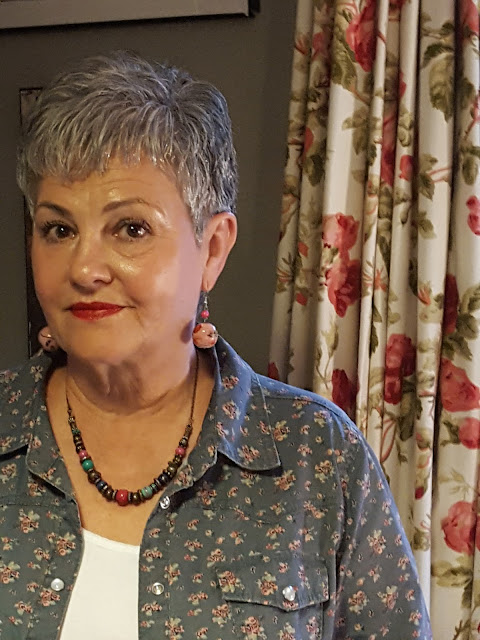 I managed to go rummaging in Newport Pagnell on Tuesday afternoon and picked up a few bargains.What did I buy? I bought some bangles and a pair of earrings  which cost me £2.00 and 3 tops for 50 p each, plus a pale green kimono jacket for 50p, too! The tops came from Keech Hospice - some of the reduced garments were 30p. What I really am after is some red skinny jeans as mine are too big for me and fall down around my hips which I hate. I didn't find any but that's what I keep looking for... 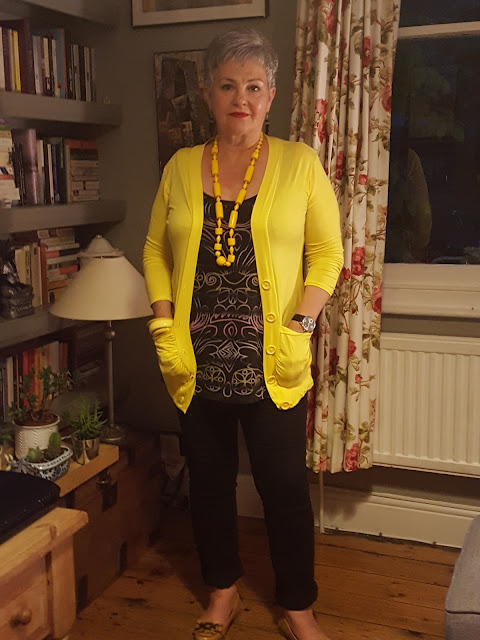 The weather scuppered my plans for walking on Wednesday. I was hoping to recce a new walk to lead another one in December; they're looking for volunteers at the moment. The Ramblers need the details by the end of the week and I'd need to recce the walk several times first. I'm hoping I get the chance to do it before this week is out. I know the route I want to take but it has to be walked first.

This is what I wore on Wednesday, although I was mainly bundled up in a huge thick cardigan, left behind by my grandson, as it was wet and chilly on Wednesday.

I think you might spot me in a crowd in this cardigan! I needed cheering up and bright colours always help. 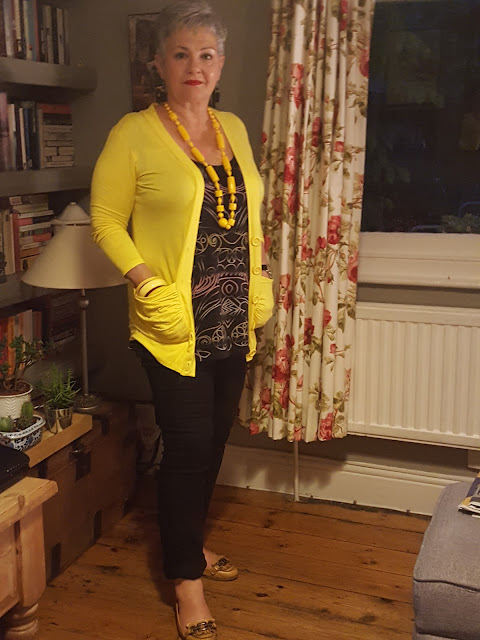 I bought this cardigan online before Christmas, when I was waiting for a yellow cardigan to arrive as a Christmas present. It was too light for winter wear, when it arrived, but I hung on to it for summer wear. The vest top was from the British Red Cross in last week's rummage. Black skinny jeans; Lidl and yellow loafers; Tesco outlet store. 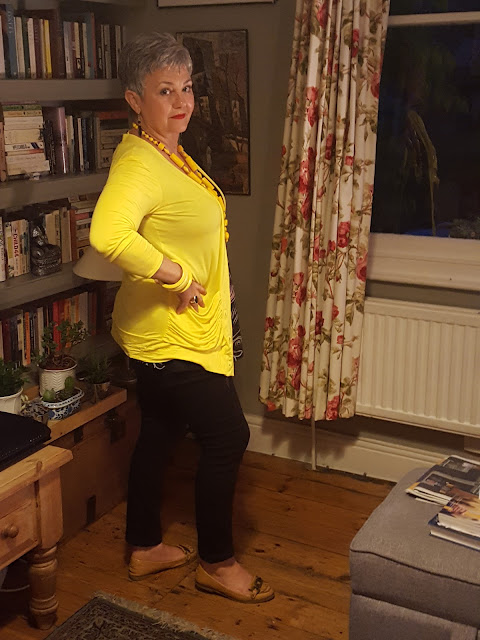 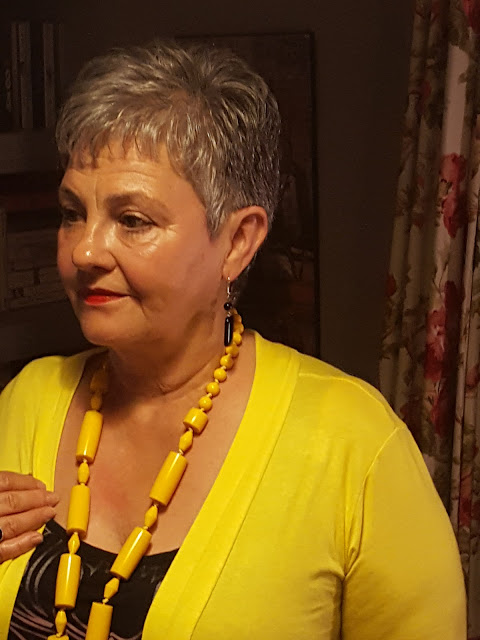 On Thursday the weather was much better and I got out  and recce'd the walk. It's just on 7 miles so if I can get to do it again over the weekend I feel confident enough to pass the details on and get ready to lead another walk. 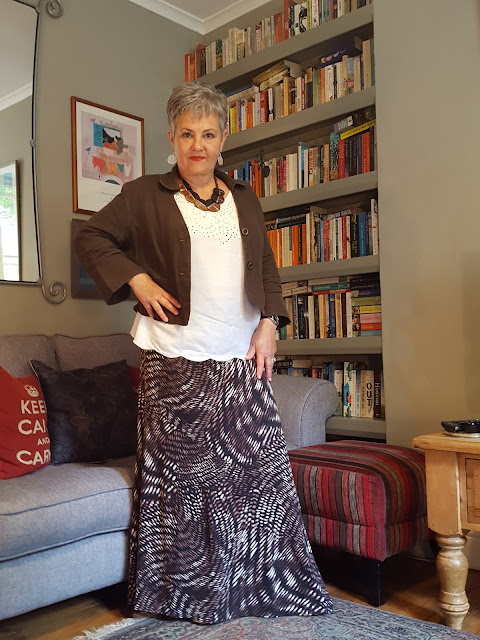 Skirt bought from Save the Children last week for £3.00; it's by Country Casuals and I just love the print. The white top is one of my Tuesday 50p bargains and originally from Monsoon, and the linen jacket I've had for about 8 years now. Every year I contemplate getting rid of it and every year I end up keeping it - and wearing it! It's very useful when a cardigan might be too warm. 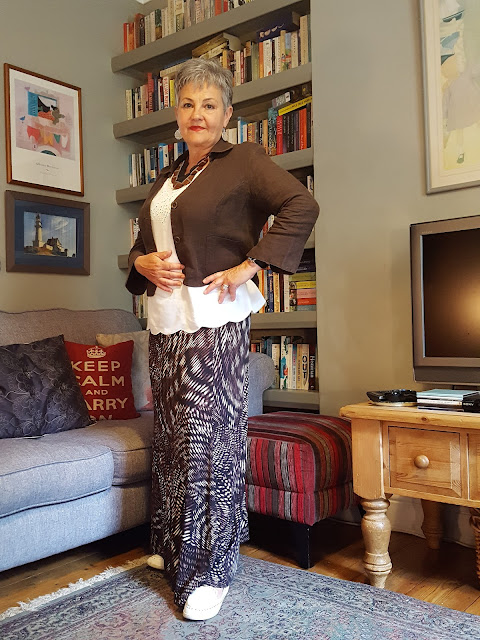 The white loafers are charity shopped but originally from River Island. I bought them from the RSPCA shop last year. 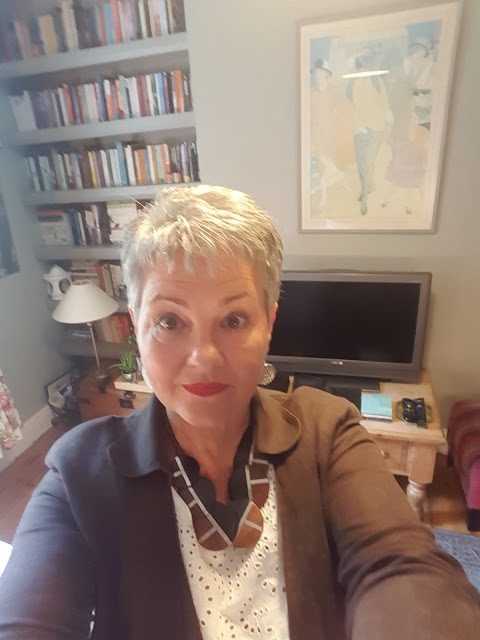 The necklace is about 6 years old and is from Sainsbury's, earrings bought from Save the Children last week.

I made a discovery today regarding charity shops in Bedford - I discovered another one! I've lived here for more than 35 years and I didn't know we had a Cat's Protection League charity shop in a place called Kempston, which is about a mile outside of Bedford. I made a point of going there today and it was worth the trip, because I picked up a pair of green palazzo pants and a lovely cobalt blue pair of skinny jeans. No red ones, unfortunately. When I count all the charity shops; including the one that sells used furniture specifically, we have a total of 18 charity shops between Bedford and Kempston.

I've got nothing planned for the rest of the week except some walking with the Ramblers on Friday and by myself at the weekend. Middle grandson is coming to stay over but he'll be glued to the football!

I hope your weekend is fabulous.